Why China will ultimately win the Russia-Ukraine war 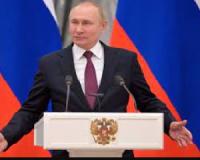 As the war between Russia and the Ukraine continues to dominate headlines, we're starting to see a realignment of the global order. The US, and its allies in Europe, are driving the push back against the invasion.

You may find this astonishing (especially if you only get your news from US and European media outlets) but they're finding little support in the rest of the world. South America, Africa and Asia have largely decided to remain neutral.

Yet, even without support from the rest of the world, the sanctions the US and its allies have levelled against Russia are devastating. Not only is Russia effectively cut off from the global financial system, but they've also lost access to much of the world's internet infrastructure as well as important parts of the global supply chain.

They can no longer send or receive money from outside Russia. A week or so back, we discussed their expulsion from SWIFT. This past week VISA and Mastercard stopped service to the country. Even inside Russia, services like Apple pay no longer work. This means Russian manufacturers cannot source key components such as airplane parts, semiconductors or mining equipment.

And, just when you thought it couldn't get any worse, global heavyweights like Microsoft, McDonalds, and Coca Cola announced they'd no longer be doing business in Russia, and in many cases with anyone Russian.

As severe as these moves are, the lesson for countries around the world is clear: If you exclusively use American and other Western technology and financial infrastructure, you become incredibly vulnerable to sanctions and US manipulation.

China has built the only feasible alternative financial and technological infrastructure to the Americans and their allies. Until recently most countries were afraid to use this infrastructure due to possible interference by the
Chinese government as well as lower grade technology. For example, the Chinese faced serious pushback when they tried to sell their 5G tech to other countries.

But that’s now less of a concern…

China doesn’t just offer an attractive alternative due to the fear of sanctions and US meddling. The Chinese now compete quite favourably in terms of technology. In some areas, like 5G, they’re even technologically more advanced.

In terms of financial infrastructure, it's good enough, so long as it works. The Western systems have been in place for decades and often have seen very little improvement over that time. They’ve simply been preferred because they’re bigger.

This war is changing that…

How China is changing creating realignment of the global order

In the last few weeks, the Chinese financial payments systems have already acquired the Russians as clients. We’re also seeing statements from other countries indicating their interest in joining the Chinese financial networks. And
China couldn’t be more pleased to expand its influence globally.

It’s one of the primary reasons for their massive Belt and Road initiative, which invests in nearly 70 countries and organisations.

Its primary goal is for China to assume more leadership in global affairs. It’s a cornerstone of Xi Jinping’s foreign policy.

So don’t be surprised if China starts a major push to promote greater adoption of their systems in the near future.

To me it is clear. China will be the overwhelming beneficiary of the realignment of the global order.

Why China will ultimately win the Russia-Ukraine war
Rate this article
Note: 3.36 of 7 votes