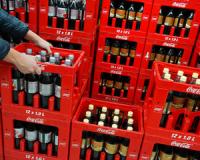 In the five years before Warren Buffett bought Coca Cola, its share price rose an average 18% per year even during the Great Depression.

But Buffett simply didn't care. In fact, his investment in coke grew nearly 16 times over!

So why did Buffett risk more than $1 billion of his money and invest in a company that seemed to be massively overvalued?

Read on and I'll explain exactly why Coca Cola was such a successful investment for Warren Buffett and I'll show you one stock that could emulate Coca Cola success…
Revealed: The REAL secret to Coca Cola’s long-term success

But what does an enduring brand value mean for a company’s share price?
1.    It keeps the company safe from competitors - Coca Cola’s global reach expands in more than 200 countries at a rate of 1.9 billion servings a day.  This had made Coca Cola’s market share of carbonated beverages worldwide around 48%, while its closest competitor, Pepsi has a market share of only 20%.

2.    It has been on the market for years and its products are #1 or #2 in its field - Coca Cola is the No. 1 provider of sparkling beverages, ready-to-drink coffees, and juices and juice drinks, employing around 700,000 people.  Not to mention, it held the No. 1 spot on Interbrand's annual ranking of global brands for 13 consecutive years, before being displaced by Apple in 2013.

What’s more, thanks to its impeccable global growth, Coco Cola hiked its dividend by a yearly average of 9% over the past decade.

I’m going to reveal it all

On 11 June, I’m holding the first Advanced Forex Master Class 2016
This won’t be like anything you have ever been to before...

As I explained earlier, Buffett always buys a company that has an enduring brand value. And there are a few listed right here, in South Africa.

Over two decades, it has expanded remarkably and now has a market cap in excess of R11 billion with its share price over R110 now. This allowed Famous Brands to seal its position on the JSE’s top 100 companies list.

The group is Africa’s leading branded food services franchisor with 19 restaurant brands in its portfolio, a network of 2,500 restaurants in 15 countries – including international exposure in the UK, India, Egypt and the United Arab Emirates – proving it’s a dominant business in its industry.

Why this “expensive” South African company will keep getting more expensive

I believe Buffett would regard FBR as a buy and hold forever stock. Not just because of its enduring brand value, but also for its:
1.    Diverse portfolio of popular food brands including Steers, Tashas, Europa and Mugg & Bean just to name a few of its many franchises. FBR massive portfolio ensures it has full control of the market share for fast-food and restaurants.

2.    It’s definitely positioned #1 or #2 in terms of its product range as Africa’s leading brand food services franchisor with over 2,500 restaurants in 15 countries.

Act today – If you miss this bull market you'll kick yourself for years to come!

FBR is just one example of a company that possesses an enduring brand value. There are many more examples: Financial services giant Discovery and retail specialist, Mr Price.

Why some expensive growth shares will keep going higher - the real secret to Coca Cola's success…
Rate this article
Note: 5 of 1 vote