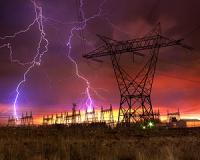 Rolling black outs are something we've become used to here in SA during the cold winter months. But rolling black outs in March, that's a bit early isn't it. Apparently not. Earlier today, Eskom warned that “seven days of continuous rain have affected [its] power stations in Mpumalanga and is still affecting coal mines”. The result? The production of electricity has come into jeopardy leaving dozens of suburbs in Cape Town and Johannesburg without power for hours. A trend that's set to continue until at least 10pm tonight. But is there an advantage lurking in this electricity grid disaster that you can profit from?

While Eskom may have you believing that the current round of black outs is an anomaly, the truth is Eskom simply doesn’t have enough coal to keep going.

As we reported here, the country needs to invest as much as R90 billion in new coal mines to keep Eskom’s coal hungry power plants with a supply of this commodity. If we don’t, we could run out of coal as early as next year!

So while the current rainy weather has certainly interrupted the parastatal’s production of electricity in the short-term, the true problem is a lot more serious. This because, come 2015, SA will have a massive shortfall of 60 million tons of coal. And that means we won’t have the required coal volumes for the new power stations Eskom’s currently building.

But it’s not all doom and gloom.

Resource and Scarcity Report chief investment analyst, Francois Joubert has uncovered a company that’s going to profit handsomely when the lights finally do go out.

With more and more Eskom black outs set to hit the country in the coming months, having this company in your portfolio will help you profit from this disaster.

For details on this company and to discover how to get your hands on Francois’ invaluable research, go here now.