Is the Proverbial Christmas Market Rally likely to happen this year? 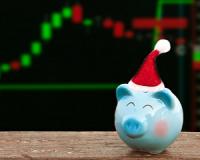 In the past 24 months the JSE All share index has been unable to lift itself out of its sideways channel.

In the last two years it only managed to deliver a 1% move for investors. The trading environment in the local market has been tough to say the least.

There has been a slew of socio-political upheavals, both internationally and locally, that have negatively affected the market.

With just over a month to go of 2016, investors and traders are beginning to wonder if they might get the proverbial “Christmas Rally”.

The most important factors driving the SA equity market.

Global economic growth – Ironically, the biggest driver of the South African market has nothing to do with South Africa. More than 50% of the JSE Top 40 are considered “rand hedges” so global events have a direct impact on the local market.
The global growth outlook remains subdued, amid slowing prospects in the advanced economies. A general downward revision to economic forecasts by institutions such as the IMF have fueled pessimism about the international growth story.
Although prospects for the US economy remain relatively favourable, outcomes have not been consistently positive.
And although the short term impacts of Brexit on the UK economy have not been as negative as investors initially feared, growth forecasts have been revised down as concerns remain regarding the longer-term investment outlook.
The euro area recovery remains steady but subdued.
The Japanese economy remains caught in a deflation and low growth bind, following a weak second quarter.
Indications are that the negative growth cycles in both Russia and Brazil have turned, and both countries are expected to record positive, but weak rates of growth in the near term.
And last but not least, the Chinese economy appears to have stabilized following concerns about a slowdown earlier in the year, but concerns regarding the financial sector persist.

I hate to be an afro-pessimist but when it comes to most economic variables (inflation, GDP growth, unemployment etc.) we’re not looking so hot

In the local context we’ve experienced muted GDP growth, while, looking at the past week’s figures, unemployment and inflation are rising faster than expectations.
The South African GDP growth rate has been trending downwards over the last few years. This year, we are likely to eke out a mere 0.60%. And it’s this poor data that has attracted the negative eye of the rating agencies. It’s also the reason local companies have been so reluctant to spend capex onshore.

The latest SA unemployment print surged to 27.1% in Q3, from 26.6% in Q2 and 25.5% in Q1. This is even worse than expectations. The number of people unemployed rose by 239k, and mainly emanated from private households.
Youth unemployment (aged between 15 – 24) stood at 30.6% in Q3. The SA unemployment rate is structurally high and there remains a national skills deficit.
Labour market rigidity is also elevated and is one of the impediments to doing business in SA. This is a large percentage of the population which could help boost domestic spending into local companies.
Unless these structural issues are addressed, high unemployment and labour market rigidity will remain a feature over the medium to longer term.

Consumer prices in South Africa rose 6.4% YoY in October of 2016, following a 6.1% increase in September.
This is the highest figure since June as cost of transport went up at a much faster pace.
Rising “cost push” inflation has an insidious effect. Input prices are higher, consumers can purchase fewer goods, revenues and profits decline, and the economy slows for a time until a steady state is reached.
While asset price inflation is generally good for equity markets, a consumer price index that is running ahead of wages and asset prices can be seen as equity market negative.

However, I still anticipate one more rate hike of 25 basis points in January to stem the outflows likely to persist following a rate hike in the US. A rise in local interest rates will increase the cost of debt and slow down credit sales. You can expect credit retailers to take some pain.
The infamous rand - Local socio-political risks remain a key swing factor for the local currency. A possible Fed rate hike in the next few weeks will also have a bearing on local monetary policy decisions which ultimately determine the exchange rate against major currencies.
I say “possible” but earlier this week Federal Fund Futures, from which you can calculated the implied probability of a rate hike in the US, were pricing in 100% chance of a rate hike in the US on the 14th of December. So it’s pretty much a done deal.
The market appreciation of the rand during the past few months has been largely driven by expectations of unchanged US monetary policy but this view is quickly changing and the rand may well trade above R14 to the dollar in the short and medium-term.
Ratings downgrade – Most recently the fear of a credit downgrade has stifled local investors and has brought about downside risk to the bond, FX and by extension equity market.
One of the biggest fear among market participants is the removal of SA government bond from the World Government Bond Index “WGBI” however these worries are misplaced.
The three agencies assessing South Africa’s foreign debt are sitting on different edges on this issue from a grading perspective.
This means rules for the WGBI index are clear:
Two rating agencies need to downgrade our domestic debt to junk before SA debt is removed from the index. Even if all three agencies act, only one will have our debt as junk, by the end of 2016.
As one of the highly anticipated events in the local economy, the equity market reaction is hard to call.
We believe that the South African equity market is not a typical “domestic” market due to the high concentration of global businesses whose valuation neither depends on local fundamentals nor domestic cost of capital considerations.
Consequently, we believe the bigger market reaction would result from a downgrade being averted – this is likely to have effects that may seem counterintuitive to many casual observers. In the event of a reprieve, we believe equity markets locally are likely to be softer at an index level due to rand strength.
We believe the likelihood remains that South Africa’s sovereign rating is downgraded by at least one agency in December 2016, but that this is largely priced into bond and currency markets. By extension, it is most probable that it is also factored into current equity valuations.

All of these macro-economic variables make investing difficult, especial for retailer investors. Here’s what to do

The market consists of different companies doing VERY different things. It is not a single beast and there are areas of the SA equity market that offer immense value to investors.
Equities remain the most attractive asset class and remain underpinned by a still relatively easy monetary policy environment. The current environment certainly requires astute stock picking and determination of specific company fundamentals insulated from adverse macroeconomic fears.
Our equity market preferences are currently currency neutral in that we refrain from taking big bets on macro events and its subsequent effect on currency.
But should you want to look at a stronger rand, it will likely pay to be overweight sectors such as Banks, Insurers and General Retailers to name a few.
Generally, I look for growth at reasonable prices.
I seek companies that have sound fundamental story that will still be intact in 50 years’ time.
I prioritize companies whose financial metrics show consistent growth and take advantage of periods of temporary negative sentiment (which reduces share prices) to collect stock.
Tags: singa gungqisa, investing, news, investing news, markets, factors, stockmarket rally, christmas market rally, christmas rally, factors driving the sa equity market, sa equity market, afro-pessimist economic outlook, south african unemployment, rising inflation in south africa, south african interest rates, south african investment environment,

Is the Proverbial Christmas Market Rally likely to happen this year?
Rate this article
Note: 5 of 1 vote