It's the 4th of July Money Morning Edition and we're celebrating US independence! 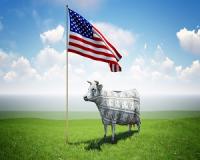 It's the 4th of July Money Morning Edition and we're celebrating US independence!
Rate this article
Note: 5 of 1 vote