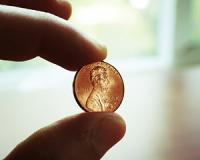 The JSE All Share Index is up 1% for the year so far.

And our economy is struggling.

It's fair to say that 2016's been a tough year. Many companies are losing money (or at least making smaller profits), and very few shares are up.

But there are a select group of investments that are outperforming the market. Tiny companies that are defying the odds. I identified these shares for my Red Hot Penny Shares readers, and I'd like to share some of these ideas with you today…

It will do so using a combination of shares and debt.

This acquisition will prove a massive game changer for Insimbi. The company will see revenue more than double and profits will increase by the same amount or even more.
If it uses only shares to do the purchase it will grow Insimbi’s profits from 12.42cps to 17.14cps.

But I’m certain the company will be able to get financing for at least a portion of the deal.

If it can get financing at Prime+1% interest and it finances HALF of the deal, with the other half being new shares issued, profits will soar. This could see profits come in at 18.5cps to 19.3cps. That’s an increase of between 49% and 55% in profit.

But the deal goes further than that.

If AMR doesn’t grow its profits by at least 50% AFTER the acquisition (in the ensuing three years), Insimbi will get some of its money back!


Towards the end of 2015 Rolfes concluded an acquisition of a new business called Bragan Chemicals.

The deal helped Rolfes take its revenue from R1 billion in 2014 to R1.36 billion today.

But at the time the market didn’t figure in the upside of the deal into Rolfes’ share price. In fact, the share hit a low of 265c early this year – putting it on a PE of 6.97. At the same time, other chemicals companies like Omnia and Afrox trade on PE’s of 16.2 and 11.2.

In the meantime, Rolfes just announced results for the year. And these results now include Bragan Chemicals for the first time, and it wasn’t even in full. Only nine months’ worth of Bragan’s performance are included in these results. So there’s still further upside once Bragan is included for a full financial year.

So, in these results Rolfes announced an increase in profits from R47 million to R80 million for the year. On a per share basis it grew earnings from 38.2cps to 55.9cps.

That’s a 46% increase in earnings, and it now puts the already cheap Rolfes on a PE of 6.9 after it’s run 38% in the past three months!


So what exactly is the upside potential?

That gives Rolfes a target share price of 700c.

It’s currently trading at a mere 400c. So there’s another 75% upside left in the share within the next year.

In the meantime, Rolfes will pay you a 6cps dividend.

The company is also sitting on a R94.5 million cash pile, equal to around 25% of its market cap!

The best part of all of this is that Alaris just concluded a new acquisition of a company called COJOT.

The acquisition was only concluded on 1 May 2016. Which means only two months’ worth of profits are included in these results.

So come the next reporting period it will include the full period’s profit from Cojot in results. This acquisition alone could easily add another 3.7cps earnings – for around 12% additional profits, to Alaris’ bottom line in the coming year. And that’s without further profit growth from any of its other businesses!

There’s a clear trend if you look at these companies. They’re all small companies with big bank accounts. They’ve all concluded acquisitions in the past year, adding to their profits.

There are a number of other opportunities just like these. I can think of Conduit Capital, CSG Group and a couple of other companies. These are the best opportunities to profit, even while the JSE is struggling…