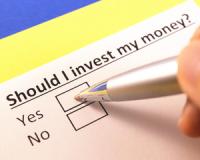 What if I told you, that you could get a big business for free? You don't have to put money down, but you'd own a portion of a franchise store, a farm or a factory…

Sounds too good to be true.

But the fact is, right now there are scores of opportunities like this on the JSE.

I call them “No money down shares”.

Simply put, these are companies where if you pay for a portion of the company, you got the rest for free.
*****************************
Your opportunity to make more than R1.34million in less than 5 years… With only R10,000 down!
It's happened before - Now it could happen to you
In just five simple, quick-fire steps R10,000 could have made you more than R1.34 million
And to do this…
You do NOT need an MBA.
You do NOT need a lot of money.
You do NOT need a lot of time.
All you need is my little-known stock market investing secret.
Click here to find out more…
*****************************
“No money down” shares are proven to make you money – but you need to know how to find them…
In March 2014, the Zeder share price was trading at 400c, so you were effectively only paying for the company’s investment in Pioneer Foods and Capespan. You got Zaad and Kaap Agri, also part of Zeder, for free.
But by February 2015, the value of the businesses Zeder owned, nearly doubled. The “free” portion of the company disappeared and its share price shot up.
By 23 April 2015, Zeder hit a high of 932c, a gain of 133%!
Or, for instance, in April 2015, I identified a little known company called Trustco.
Trustco owns financial services companies in Namibia. But what I also uncovered was that based on its share price, you got a massive portfolio of properties that Trustco owned for free.
I bought Trustco at 300c that month, and managed to sell it at a 56% gain by August that year!
Another example, Insimbi Refractories. In January 2016 I identified the company when it was trading at 84c, but investors were completely unaware of a new acquisition the company had made, merely paying the ‘old’ market price for the company. I immediately knew that the new business the company had bought was being given away for free with the share price back then.
And, by May 2016 the Insimbi share price hit 130c as investors realised the value of the newly acquired business. A smashing gain of 54.76% in 5 months!
Simply put, “No money down” shares are companies where the market hasn’t realised the true value of the business and you get a part of it for free!
A quick scan of the JSE shows at least 20 potential
“No money down” shares
Considering the struggling economy, the kind of shares I am looking for today are the ones that have lots of upside potential, but also the ones that are already misunderstood and undervalued by the market.
So, I did a quick scan of the JSE to identify a couple of potential shares that might fit the bill…
*****************************
The overlooked technique that will change your life...
Okay. So let's answer the millionaire dollar question...
"How does my strategy work?"
I'm going to show you, step-by-very-simple-step how you can make rapid money from the financial markets, using a smart little technique called Break-out trading, though I like to call it pickpocket trading as that’s what it feels like you're doing.
However you like to think about it, Break-outs are a form of high profitable trading, which is the same type of straightforward trade you can get down the stock markets, only with one major difference...
You'll be making your money from the Forex market.
And you'll know up front what your maximum profit is AND what your risk is.
Are you ready to start profiting today?
*****************************
20 penny shares selling for less than they are worth right now Looking at this table you’ll see that I filtered out the penny shares that are selling at a greater than 20% discount to the value of their assets. That means you get at least 20% of these companies for free. Furthermore, I require them to be profitable as well.
There are a handful of these shares that are already in my Red Hot Penny Shares portfolio – with explosive potential.
And this month I’ve identified a company from this list, which I believe is potentially even more undervalued than these numbers suggest…
Digging deeper, and considering numbers that do not yet show on the companies financials tell me that it is selling for HALF price – whilst already paying dividends to shareholders as well.
But instead of only considering my best buy on this list, I’ll also show my Red Hot Penny Shares readers what to look out for. Because trust me – there’s a couple of shares on this list you want to avoid at ALL costs!
Here’s to unleashing real value