When NOBODY invests in the JSE, BIG upside is ahead… 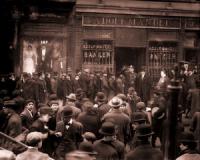 You've heard the term ‘Buy when there's blood on the streets'.

This is contrarian investing at its hear. But it's been proven true time and again.

In fact, if you'd simply bought a simple ETF like Satrix 40 following the 2008 financial crisis, you'd have made around 70%.

Investing in individual shares following the same crisis would've made you 200%, 300% and in many cases, 600% or more.

Today, I believe, is one of those opportunities.

Investor sentiment right now, is at a ‘crisis’ low!


“Francois! What are you talking about the JSE All-Share Index is on a PE of 22?! Markets are overpriced and investors are overoptimistic!”

But that’s just where you’d be wrong.

You see, the way the powers that be have set up the JSE’s indices, means that they're skewed due to the impact of large companies.

So the larger a company is, the bigger its effect will be on the index.

In the case of the JSE, there are a handful of huge companies that skew the results.

If you strip out these, and a couple of other companies, the average PE for shares in the All-Share index goes down considerably. Suddenly, it doesn’t look as expensive compared to the long-term average of 15.

Now consider another fact: Since the start of 2016, foreigners have taken a net of R40.85 billion capital OUT of the JSE.

What that tells me is that EVERYONE is fearful about the market now... and NOBODY is interested in stocks...

An invitation to join…

This is a huge opportunity to invest in the JSE right now!


So, you might be wondering, if everyone hates stocks, why is there upside potential?

That's a good question. But think about it... You don't want to buy an investment after everyone has already bought it. That's like buying real estate at the height of 2008 – when everyone was greedy. If you bought then, you would have missed the upside.

Instead, you want to follow the advice of Warren Buffett, one of the greatest investors of all time. As he famously said, "Be greedy when others are fearful, and fearful when others are greedy."

Just consider these shares, arguably three of the hottest small caps on our market right now, all at bargain basement prices:

The company released interim results on 19 April 2016 and these showed yet another increase of 28% in revenue with its order book increasing to R5 billion worth of future projects compared to R3.7 billion a year ago.

Just look at the earnings growth CIL amassed since 2012. The company grew earnings every 6 months. 2016’s interim earnings grew 24% on 2015’s. Based on my forecast for full year earnings, CIL is on a PE of 10.78. The JSE All-Share Index is on a PE of 22 in comparison. So you’re getting this small, yet fast growing company at a massive discount.


Wescoal is a small company with three coal mines and a coal trading business.

I haven’t seen the markets so scared of mining shares like it is now, and this presents a massive opportunity for those willing to buy this share…

Wescoal built a new mine in 2015, Elandspruit. It’s ramped up production there and is at the point of getting a fixed supply contract with Eskom. All that it needs in place is to get BEE ownership past 50% - and the company is well on its way to do so.

This puts Wescoal on a PE of 7.2. Dirt Cheap if I may say so myself.

But what you don’t know yet, is that the company should see profits nearly double again as we move towards 2017.

How do I know that? Well, in the first half of its most recent financial year, Wescoal made 5.1cps earnings. Then in the second half, as its new mine kicked in, it made a profit of 22cps in 6 months.

So if it only matches this performance for the next 12 months, the company will sit on earnings of 44cps. At a PE of 10, which is still far below the market average, this would give Wescoal a target price of 440c. 125% upside from its current share price!


In the past three years, Rolfes’ share price is down 50%. But that’s just pure bad sentiment. You see, in 2011 the company had earnings of 31cps. This year it’s set to report earnings of at least 47.8cps.

Again, I believe the share price should be much higher than this.

The company sent out a trading statement on 30 May 2016 announcing a profit increase of more than 25% for 2016. And this during a very difficult year.

My target price for the share is around 600c, compared to its current 320c.

Found within the confusing fog of the global currency markets...

Crystal-Clear 1-4 day 'Profit Windows'
That Secretly Open And Shut
4 to 8 Times A Month...

It’s said you never hear a bullet until it’s already whizzed past.

And for most investors… that’s how they experience the rapid-fire profit opportunities of the global currency markets.

Those that do spot them… rarely react in time.

But today I want to show you how you can profit from these rare opportunities...

Now is the time to be bold


I know the markets look like a scary place right now.

But the opportunities are rife.

There are many shares that are grossly undervalued. Foreign investors have fled out of the JSE.

But once investors calm down and consider the immense opportunities around, rationally I expect shares like the three I named above will soar.

Make sure you’re on the right side of the move!

When NOBODY invests in the JSE, BIG upside is ahead…
Rate this article
Note: 3.75 of 2 votes