Commodity prices are soaring, can this trend continue? 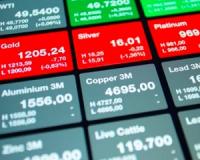 But the soaring prices haven't just been in these precious metals.

Similarly the price of iron ore is also at the highest levels it has ever seen right now.

Coal - which is really out of fashion and slated as a diminishing commodity is up 75% from its 2020 lows and even though Nickel has seen a bit of a pull back, the commodity is 61% higher than it was in March 2020.

In fact, fifty-three out of 63 commodities monitored by the World Bank were up in price in December 2020 compared with the same month a year earlier.
________________________________________
Read: My top Five Penny Stocks to buy and Hold In 2021 – see here!
________________________________________
So why are commodity prices soaring like this?
There are at least x reasons why commodity prices are soaring:
• Commodity price booster #1 – Many mines shut down during the 2020 pandemic. That means stockpiles ran empty and production came in lower than what would ordinarily be required. So there was definitely a temporary shortage as things started up again.
• Commodity price booster #2 – As factories have opened up again they’ve had to restock, and they have done this rapidly. By November 2020 global manufacturing had recovered to reach levels 1% HIGHER than before the pandemic. So this means there have been a big rush of restocking at factories, while mines probably expected lower demand.
• Commodity price booster #3 – Supply chain issues have hit a lot of businesses as economies have opened up. The reason? It takes time to ship things halfway around the world – and shipping hit a standstill during early 2020. That means many businesses have scrambled to buy inputs, often at any cost just so that they have something to sell. Similarly, in fear of running out of inputs/stock many businesses are increasing their inventory levels above what is normal to ensure they don’t hit any supply shortages going forward.
• Commodity price booster #4 – Artificial stimulus around the world is at record highs. Central banks are flooding markets with cheap money. Interest rates are at rock bottom levels. Typically this stimulus inflates asset and commodity prices.
• Commodity price booster #5 – The dollar has been weakening recently. Normally a weakening dollar hurts U.S. importers and Americans traveling abroad but thanks to huge artificial stimulus this isn’t happening yet. But because the value of the dollar is weakening, commodity producers would require more dollars to actually keep the price they receive in their local currency equal – and hence the price of commodities in dollars rise as the dollar weakens.
________________________________________
Read: In 2020, the ‘cash is trash’ trend sent gold, tech stocks and cryptos soaring… Today, you’ll discover a roadmap for what could boom next — including what to invest in now!
________________________________________
Can this trend be sustained?
It is unlikely that this trend will be sustained for a very long time.
As businesses restock, and supply chain issues resolve themselves toward the end of 2021, I believe there will be a cooling down in demand for commodities.
Demand won’t fall off the cliff. But it will normalise.
At the same time, things like recycling of metals and retreatment of tailings dumps typically picks up very quickly when commodity prices soar like this.
And that again increases supply – putting downward pressure on prices.
Lastly – stimulus won’t be permanent.
China has already started slowly withdrawing pandemic stimulus from its economy.
Other countries will follow. I assume as vaccinations create immunity, and the pandemic ends most countries will slowly reduce stimulus till economies are firing on all cylinders again.
That will also probably cause a slight pullback in commodity prices.
So for now I expect mining companies to start releasing astronomical results with huge cash inflows and profits.
The companies to hold onto now will be the ones paying off their debt. Not the ones doing many new acquisitions.
We’re heading for the top of the cycle. So there’s profits to be made – but you should have already bought into your mining stocks before now…
Here’s to unleashing real value
Francois Joubert
Editor, Red Hot Penny Shares
Tags: francois joubert, investing, commodity, resources

Commodity prices are soaring, can this trend continue?
Rate this article
Note: 4.88 of 4 votes