Don't believe the bounce. Now is the time to buy gold 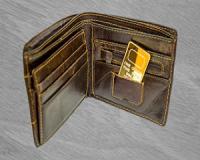 What a horrible start to the year.

Just four months ago most people were dreaming about all the possibilities the new decade held. The world's newspapers and blogs were full of what could potentially be coming in the next 10 years. The widespread use of driverless electric cars. The excitement and fear over the rise of a real artificial Intelligence. And the massive advances in healthcare science and medical devices which will extend and improve the quality of life for all.

And, while everyone was looking right, the coronavirus arrived from left field.

Now the headlines are dominated by lockdowns, death counts and asset price collapses.

And while I have an idea of how you can protect yourself and profit in the chaos, let me make it very clear: In spite of the sharp recovery we've seen off the lows, I don't believe the worst of the financial market turmoil is behind us.
________________________________________
Breaking: Since the coronavirus outbreak these gains have been pouring in...51.57%... 323.00%... 15.80%... 44.10%... 114.29% often in a matter of days!
Here’s how to give your portfolio the hedge fund advantage
________________________________________
This could quite possibly be the catalyst for another leg down
As US earnings season begins this week, we’re going to start to see the true devastation COVID19 and the lockdowns caused.
And, even if traders and investors manage to look through the numbers to the world of tomorrow, but realise a vaccine is more than 12 months away...
The selling will resume in earnest.
Picture a world where you must lift your mask to take a bite of food at a restaurant. Or that aeroplanes which only carry one quarter of the passengers as social distancing becomes entrenched in society.
Even with a vaccine, I believe there will be permanent changes to the way our globalised society functions.
Here’s why I say: Don’t believe the bounce! Buy gold
The rand gold price has rocketed. Would you believe gold is now more than one million rand per kilogram?
The dollar gold price is around $1,715.60 almost back at the highs we saw in 2011.
2011….
Here lies the key!
You see, the global financial crisis (GFC) crash happened in 2008/2009. Yet is took almost three years for the USD price of gold to reach its apex. Why?
The gold price basically doubled in USD value from the end of 2008 to the peak 2011.
This was largely because of the response taken by global monetary authorities.
When you’re dumping huge amounts of liquidity into the system (i.e. printing money as fast as the presses will run) market participants start to get concerned about holding cash balances.
Here’s what I mean:
In the normal world when everything is working properly you would rather have your money in the bank. Because you’re going to earn interest.
Gold doesn’t pay interest.
But, when there is a market crash, central banks take the interest rates down aggressively to support the economy.
Just this week SARB cut interest rates by another 100 basis points.  And there is likely more to come.
In that environment gold becomes more attractive.
Now you still have the choice between holding the money in the bank (a paper asset backed by the promises of government which pays almost no interest) or gold (a physical commodity which cannot just be duplicated).
The decision is easy… Hold the gold.
My prediction: Gold will continue going up until interest rates bottom and look like they’re going to move higher.
________________________________________
Recommended! Five defensive penny stock plays that could make you richer despite the Corona Crisis!
________________________________________
There are only two ways you should buy gold
The incorrect way to buy gold is through one of these two-bit gold merchants with their billboards and expensive marketing campaigns. Their mark up on the spot price of gold is significant.
I feel the same way about the numismatic dealers or coin shops. You’re as likely to walk out with some sort of stamped coin at an inflated price nowhere near intrinsic value as you are with a real investment coin.
In my opinion there are two ways a South African should buy gold.
One, you buy it through an ETF contract, so you don’t have to hassle with the physical stuff. You don’t run the risk of storage and you don’t have to transport it around when you want to sell it. The downside is it’s going to cost you around 0.75% per year in the contract which can be avoided by holding the physical coins.
Two, you hold the physical coins. Here you MUST buy Krugerrands and not coins with fancy stamps etc. You can buy tenths, half's or full Krugerrands but you should buy them through a registered stockbroker.
Why do I say that?
I recently did a pricing exercise and through our stockbroking member’s licence. We can often buy Krugerrands cheaper that the coin dealers can buy from the Rand Refinery.
It is by far the cheapest and most efficient way of accessing physical gold.
If you are interested in getting Krugerrand coins or opening an account to purchase gold ETFs either locally or offshore, you can contact me on support@randswiss.com.
Gary Booysen,
Rand Swiss, Wealth Manager
Tags: gary booysen, resources, gold, investing,

Don't believe the bounce. Now is the time to buy gold
Rate this article
Note: 4.67 of 6 votes