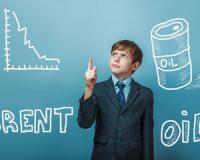 Brent Crude has been in the spotlight this month.

There's conflict between the analysts and the big banks, on where they expect the price to go.

On the one side, many analysts expect the price of oil to hit new highs at $80.68 per barrel. They believe there may be a strain on supply in the next couple of months, due to the US trade sanctions on Iran and the Venezualan crisis.
On the other side, we have banks such as, BNP Paribus saying, “We see global oil demand growing by 1.4-million barrels a day in both 2018 and 2019".
This implies that global markets will remain sufficiently supplied which shouldn’t have a major impact on the Brent Crude price.
But what are the charts saying?
Let’s see the bigger picture on where Brent Crude is most likely to go and how you can profit from the next big move.
**********Advertisement**********
Your chance to win 5 out of 8 bets on the English Premier league!
Every day thousands of punters are looking for the perfect bet in sports betting! Most people think winning bets is down to blind luck.
And I get that.
But while there is an element of chance involved, the really, really great tipsters out there spend their time analysing hundreds - sometimes thousands - of pieces of data.
Then, that data is collected, collated and analysed.
It's pretty much a full time job…
And the hard work really pays off.
Take this guy for example…
He's produced winners of up to R1,140 and even a whopping R1,750.
Every Friday evening he sends his readers simple, step-by-step instructions on what bets to place.
In short, it couldn't be easier for ordinary people like you to take advantage of this.
Overall, this trends expert lands a profit in around 60% of his bets.
Don’t miss this opportunity to get in on this betting strategy for the English Premier League.
******************************
Brent Crude is set to fly thanks to this triangle Brent Crude has formed a falling wedge on the above daily chart. This is a technical pattern, which consolidates in a triangular formation, before it breaks out.
As the previous trend of Brent Crude was up, the wedge pattern in this case is known as a continuation pattern.
This simply means that when the price breaks out of the wedge, we could expect the price to continue up.
So where can we expect the price to head next?
The wedge is one of the easiest technical patterns to calculate its next target.
All you’ll do is look for the highest point of the triangle.
In this case, the highest point is drawn with a horizontal green line at $80.00 in the above chart.
This means we can expect the price to fly to the top of the wedge formation at $80.00.
Coincidentally, this aligns very nicely with the analysts predictions at $80.68. The only difference is that, as they say is, “charts don’t lie”.
This is why it is always best to hear the opinions of others but always go back to analyse the main chart.
By doing this, you’ll have a non-biased direction of where the price is more likely to head.
**********Advertisement**********
How to generate a R700,000 windfall starting with R10,000 using the oldest wealth trick in the world
This wealth secret is the most powerful force in finance. It’s the force behind almost every fortune. The brilliant financial writer of the Dow Theory Letters, Richard Russell, called it “The Royal Road to Riches.” And it’s been mathematically proven time and time again as the #1 ’how to get rich quick’ trick in the modern world.
Even Einstein joked that it is “the most powerful force in the universe.”
And in my brand new book, The Little Book of Big Income – 7 Filthy Secrets to Get Rich Quick, I’ll show you how to use it to turn R10,000 into more than R700,000 on page 11.
But you must act fast…
My publisher is only allowing me to give away 300 hundred copies as a special launch offer,
Claim your free copy of Little Book of Big Income here
******************************
How you can profit from the rise in Brent Crude
There are two main ways you can profit from this upside to come.
You can either directly profit by buying the Brent Crude CFDs and hold until it hits $80.68.
Or you can join Red Hot Storm Trader where we’ll profit from the rise in oil companies, when the price breaks out. These companies include the JSE listed Sasol and SACOIL.
Always remember, “Wisdom yields Wealth”

Forget what analysts and banks are predicting about Brent Crude - the answer lies in this one chart
Rate this article
Note: 4.3 of 5 votes