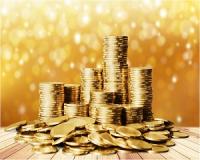 Russia is hoarding gold. The country has bought around 230 tonnes of gold since the start of 2018.

In fact, there are reports that the Central Bank of Russia is studying a proposal to create a gold-backed cryptocurrency, which could be used for cross-border settlements with other countries.
That would effectively be the beginning of a new gold standard!
At current levels this means that nearly a quarter of Russia’s $500 billion foreign exchange reserves are now held in gold.
________________________________________
"Russia Is Dumping U.S. Dollars to Hoard Gold” - BLOOMBERG
“China's gold-buying spree continues as central-bank market booms” – BUSINESS INSIDER
“Central bank gold buying hits highest level in half a century.” - CNBC
One of the most powerful investors in the world – George Soros, who has a net worth of $8.3bn – recently took a "massive position" in gold.
These are the biggest buyers in the financial world. Market movers.
They are buying gold at a record breaking pace… and that tells me they are preparing for a crisis.
Do not get left behind.
Let me show you how I think you could profit from the rush into gold…
Everything you need is in my Gold Playbook for 2019.
________________________________________
Russia is now a bigger holder of gold than CHINA
China’s been one of the biggest gold buyers in decades.
China increased its gold purchases for the sixth month running in May, taking its total reserves to 1,916 tonnes, while the country’s foreign exchange holdings defied expectations for a fall.
The country has accumulated 74 tonnes of the precious metal since the end of November, when it initially began ramping up purchases, according to Refinitiv data. The value of its reserves have risen to $79.8bn as US-China trade tensions have rumbled on.
But Russia’s gold reserves have overtaken China’s in 2019.
In fact – gold purchases at the moment have outstripped supply from mines.
That means the gold being purchased is now coming from above ground stocks – and that’s why prices are moving upward.
________________________________________
“If you want to make a killing from cryptocurrencies – read this book as FAST as you bloody can!”
I’d like to rush you a copy of my book, Crypto Revolution, right away.
Inside you will find everything you need to understand this financial revolution…
And take maximum – potentially life-changing – advantage of it.
Including the name of the coin I am calling “The Bitcoin Killer”…
A cryptocurrency that could ultimately climb 20,000% from where it sits today.
CLAIM YOUR BOOK IMMEDIATELY
________________________________________
Three reasons why world super powers are now hoarding more gold than ever
Gold Hoarding reason #1 – De-dollarisation
The USA has been the dominant country globally for nearly a century now. And with its dominance has come currency dominance as well. Commodities are priced in USD, world trade happens in USD. US bonds account for the majority of world debt – and they are priced in USD. That means most other countries are very reliant on the Dollar.
But countries like Russia and China are fed up with following the US. That’s why they’ve been steadily increasing their gold holdings in the past couple of years. Russia’s central bank calls it Diversification. But in truth it’s de-dollarisation.
Gold Hoarding reason #2 – Very low interest rates and volatile currencies
Typically investors looking for safety buy government bonds.
But once interest rates head downwards to near 0%, like they are in Japan and Europe, it becomes less attractive to hold these bonds.
And that’s when gold shines – as investors then hoard more gold as a store of value.
You see, thanks to a limited supply of gold, and rising mining costs, it tends to track inflation in the long run.
Gold Hoarding reason #3 – Threat of war
When there’s threat of war gold has always been a stable investment. That’s because a small amount of gold equals a lot of money. It’s very portable, and easy enough to secure.
So, if there’s a war that could ravage economies, currencies or cause great uncertainty – gold is a go-to investment.
Currently there are a number of threats on the horizon. Both Iran and North Korea are developing nuclear programmes against the backdrop of US sanctions. Iran recently shot down a US drone, and the threat of war is getting ever greater…
Central banks backed up the truck for gold in 2018, buying 651.5 tonnes versus 375 tonnes in 2017. That’s the largest net purchase of gold since 1967. 2019 looks like it will be another massive year for gold purchases.
And if there’s a dominant theme to get from these purchases is that they are borne out of anti-US sentiment.
Buyers are predominantly from countries that stand in direct economic or political opposition to the U.S., and so are keen to move away from the U.S. dollar as a foreign reserve currency…
I expect further upside for gold in coming months and years – and gold miners (see my Gold Playbook...) will certainly take advantage of this trend.
Here’s to unleashing real value,

Russia is hoarding gold like there's no tomorrow
Rate this article
Note: 3.25 of 4 votes