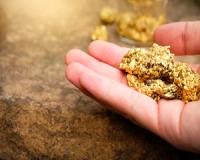 As I write this, over 1.8 billion people are currently in lock down.

And while most of us are twiddling our thumbs at home, we are probably asking the same questions.

I might not have the answer to the first two, but I can tell you my findings on where I'll be investing my money in the next 21 days for sure.
________________________________________
HOT UPDATE:
Pickpocket Trader just closed a massive 323% gain on the US 500…
In the same week,  his followers could've banked another 51.57% % on brent crude and 15.8% on Merck!
Read on to find out how you can get in on the next big gain!
________________________________________
Could gold be the answer to Corona-proof your portfolio?
Gold wasn’t immune to the sudden panic selling over the last two weeks.
While we saw stock markets, commodities and shares crash 10%, 20% and even 40%, gold slumped over 14% as well.
In fact, this negative price move on gold, reminded me of the old adage which goes:
‘In a crisis, all correlations go to one’.
There were a number of short-term factors that caused gold to fall including:
• Most of the largest gold refineries & mints have closed their operations for the next two weeks.
• The uncertainty with when operations will run again, have scared off many new and old investors.
• Major concerns about the demand for the metal in the next couple of months.
• People and corporations are closing their positions to hold and preserve cash during these times.
I say short term effect, because of how we saw gold perform in the last seven days.
We saw it recover most of its losses, and close up over 8.8% for the week.
As we are learning to adapt and adjust to this new way of life, there are a number of reasons why I will be investing in gold in the next 21 days.
Reason #1: The Fed is printing “unlimited” money
Once again, the central banks are resorting to quantitative easing (QE). This is to limit the pandemic’s economic toll.
The Fed announced “unlimited” QE and an estimated $2 trillion stimulus package (9.3% of the US GDP) for households and business loans.
That’s more money than during the 9-11 terrorist attack and the 2008 Financial Crash.
This includes buying government bonds and financial assets to pump money into the economy.
Since the stimulus package was proposed last week, we saw gold make a huge recovery as investors buying sentiment started to pick up again.
It is on a positive note, that the US government is getting on top of the virus and is going to be funding all the spending in their economy for the next six weeks.
Even Sean Lusk, co-director of Walsh Trading said “If these conditions aren’t bullish for gold, I don’t know what else could be,”
Reason #2: Gold prices rallied higher as record U.S jobless claims came in
No one has seen anything like this before…
Last week, the US Department of Labour announced that 3.283 million people had filed initial unemployment claims in the week ended March 21.
Just take a look at the chart… And despite this new unemployment record number, we continued to see gold rally over 8% in the same week.
In fact, it was the largest daily percentage move for gold in over a decade.
And the demand for investors in gold came mostly from Europe and the U.S.
Edward Moya, Senior market analyst at Oanda summed it up nicely…
“Gold will resume its role as a favoured safe-haven as traders begin to try to model how bad the global economy will get and knowing that governments and central banks are doing everything they can.”
With the COVID-19 outbreak, it has so far proven that gold’s safe haven status is back and it shows how valuable it is to have this precious metal in their portfolios…
Also, looking at the chart, it looks like gold is about to make record highs. Why this Megaphone is set to take gold to $1,960 an ounce

Looking at the weekly chart of gold, you can see since 13 Aug 2018, gold has been moving up in a Megaphone formation.
This is a triangle pattern where the price makes higher highs and higher lows.
Now the fact that the most recent higher low ($1,450), did not even touch the floor level (bottom black line), tells me investors are more eager to buy up the metal than sell it.
This means, we can expect the price to break up and out of the Megaphone formation, which will take it to new highs.
To calculate this next price target, we’ll take the difference from the most recent high and low price and add it to the high price…
Price target = ($1,705 - $1,450) + $1,705
= $1,960
Once, gold breaks up and out of the Megaphone formation, I expect the price to rally to $1,960 in the next few weeks.
How you can see my gold profit trade ideas this week
If you’d like to see what gold trade opportunities I’ll be buying and selling with entry, stop loss and take profit levels this week, then  Red Hot Storm Trader is your best medium… Read more by clicking here…
Trade well,

This precious metal just proved its safe-haven status during the world-wide lockdown
Rate this article
Note: 4.3 of 5 votes