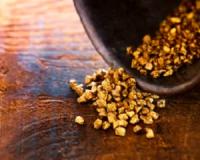 Pan African Resources hit 513c on Tuesday 21 July. That's the highest the stock has ever been.

But I'm not surprised.

In fact, I don't even think that its run is over.

You see, the company made a very exciting announcement a week or so ago… Get in now before the share price rebounds
________________________________________
Pan Af uncovered some of the richest gold reserves in existence today
Pan Af has started mining one of the richest gold reserves in existence right now.
It all started in mid-2018 when Pan Af reported:
“The head grade improved from an average of 8.7 g/t during July to December 2017 to 11.5 g/t last month, predominantly as a result of mining high-grade ore at the 272 platform since January.
The latest on-reef development samples taken in the 272 platform recorded an average grade of 99.2 g/t (ranging from 2.2 g/t to 1 320 g/t) over a mineralised width of 3.36 m along a strike length of 24 m. This confirms that the high-grade areas of this mining block are now in production”
It goes on, saying that:
“Further, face sampling of the on-reef development, taken of the mineralized 11 block MRC orebody at the 358 platform, resulted in an average grade of 45.7 g/t over a mineralized width of 2 m, confirming that the on-reef development has reached the high-grade section.”
The company’s latest operational report stated that it has continued development of these rich gold deposits and things are looking great:
In the Group’s interim results presentation, detailed plans were provided on the development into new stopping areas around the PC Shaft.
Development into the first target block on 42 level of this shaft has been completed, with a proved mineral reserve of 5,000 tons at an average grade of 25g/t delineated. The ore body was intersected in early May 2020, following delays due to COVID-19 disruptions, and initial sampling revealed grades in certain areas in excess of 300g/t, containing large amounts of visible gold.
Production from this resource block at the New Consort Mine is expected to reduce the mine’s AISC and ensure the operation’s future profitability. The Group’s on-site exploration team has identified a number of additional potential targets using advanced exploration techniques, which will be further explored and developed, if viable, in the next year.
________________________________________