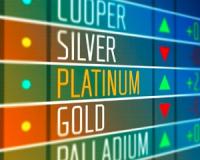 It's been a while since my last Platinum prediction article. In fact, it took almost 2 years to run up 31% to finally reach my price target.

And it hit that price target 2 weeks ago!

If you missed this article catch up here…
URGENT: The next 31% rally for this forgotten precious metal is imminent
Now I know what you’re thinking…
A 31% rally in two years doesn’t sound like much of a return. But you have to remember this…
Precious metals don’t move up as fast as shares, indices and crypto-currencies. And for this reason they are highly geared markets.
It’s normal to trade a precious metal i.e. platinum with a gearing of 50 times.
All you need to know, with gearing is, when the price goes up a small amount, you can an exponential amount more…
And so if Platinum runs up 31%, with a 50 times gearing, means you could make 155% (50 times gearing X 31% return)!
And today, I have an even better profit opportunity than in 2019…
As of last month, Platinum broke out of a 6 ½ year sideways range and is ready to rocket even more…
Not 31% not 40% but over 48%...
Let me explain and how we can profit from the rise…
________________________________________

COVID has created the perfect market for savvy stock pickers. In fact, some of my readers have already been rewarded with an insane 519% gain from DRD Gold, 330% from Jubilee and tallying up our closed portfolio at Jan 2021, we’ve generated average gains of 64% across a portfolio of 13 stocks.
We’re on the hunt for more. Care to join us…?
________________________________________
Platinum in a nutshell
First of all.
Platinum is both an industrial and a precious metal.
The four major segments for platinum’s demand includes:
• 41% in automotive (catalytic converters)
• 22% in industrial & manufacturing
• 33% in jewellery (minting & collecting)
• 3-8% in investments
And just a few years ago, the demand for investing in platinum was between 1% and 4%...
So this means, we’re seeing an increase in platinum investments with money managers.
Investors are loving platinum
Why you ask? Well two main reasons.
First, according to the Wall Street Journal they report that platinum is seen as a good store of value while inflation is rising…
NOTE: This makes sense, as platinum is priced in US dollars. And as the dollar value continue to drop, the price of the metal picks up…
Second, investors are betting that platinum will play a key role in the transition to cleaner energy.
And so, we’re seeing major investment plays with platinum…
In fact, according to World Platinum Investment Council, we saw platinum ETFs (Exchange Traded Funds) reach a new record of inflows of over 3.9 million troy ounces at the end of January.
Here’s what Trevor Raymond, research director at the group, told WSJ…
“We have seen investors who have owned gold for years recently moving into platinum for the first time,”
It is evident with what we’ve seen in the last three months even.
Here’s an idea of what investors have been piling their money into:
• Aberdeen Standard Platinum Shares ETF which increased 43.1%.
• GraniteShares Platinum Trust (PLTM) has added 44.5%.
Before I continue, I would like to quote what Stephen Innes (chief global strategist at financial services firm Axi) concluded beautifully,
"Green energy encouragement... all this infrastructure reflation kind of mood and the weaker US dollar narrative” were among the factors driving prices.
Now let’s move to my main reason for the upside in platinum’s price to come.
Why a Double Bottom Formation is showing a 48% price rally for platinum

In the weekly Platinum chart, you can see since 16 February 2015, it’s formed a large breakout pattern known as the Double Bottom Formation (Shaded area).
A Double Bottom Formation is a price pattern that resembles the letter W with two rounding bottoms with a high and low price in-between.
With this Platinum Double Bottom Formation – the low price is at $618 and the high price is at $1,201.
Three weeks ago, we saw the price break up and out of the high level at $1,201, for the first time in over 6 years.
This tells me that the buyers (bulls) are ready to pile into the metal and continue to push the price up.
To calculate the next price target, we’ll use the High-Low formula.
This formula finds the price difference between the high and low price of the Formation and is then added to the high.
Which in this case is:
Price target = (High - low) + High
= ($1,201 - $618) + $1,201
= $1,784
________________________________________
Forget Bitcoin, Buy this instead!
Projected Upside: 900%
The crypto bull run is officially underway.
But forget Bitcoin for a moment: There's a better buy out there.
(Click here, and you can find out what it is.)
________________________________________
How’s how I’ll profit from the 48% Platinum Rise
First, I’ll buy the precious metal through CFDs and hold it until the price hits the $1,784 level.,
Second, I’ll be looking for companies that go up when platinum’s price moves up such as, Implats, Anglo American Platinum, Sibanye, Glencore and so on…
The only way you’ll see these trade ideas with full analyses, is by being a Red Hot Storm Trader. You can read more by going here…
Trade well,
Timon Rossolimos,
Analyst, Red Hot Storm Trader
Tags: timon rossolimos, trading, resources, platinum

Why investors are loving platinum right now and why I expect another 48% rally
Rate this article
Note: 5 of 3 votes