Why Platinum Is Doomed? 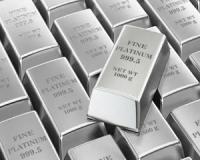 Today we'll go over why the era of electric cars could kill platinum as we know it, why I expect huge downside and what we can do to profit.

“It's a long-term risk to platinum; electric battery vehicles
don't need any platinum at all”

This is what Investec analyst, Marc Elliot told Bloomberg and that he anticipated a decade-long transition to electric cars, with hybrid cars.
In fact, right now the overall electric-car sales market stands at 2% in 2019. However, the sales are predicted to make up around 57% by 2040 - reaching 56 million!

This might sound great for the environment and our pockets, but this is causing major worries for platinum miners.

Currently, the auto-industry, is the largest consumer of platinum which accounts for 40% of the total demand for the metal.

Just to give you an idea, platinum is mainly used by car makers in catalytic converters, auto-catalysts found in gasoline and diesel cars.

And with electric vehicles on the rise, this will have a catastrophic long-term impact on demand and the platinum price. According to VisualCapitalist.com, in 2018 1/3rd of all passenger vehicles were electric and that percentage is only expected to rise in the near future.
To put this acceleration rate into perspective, it took five years to sell 1 million electric cars. And in 2018, it only took six months.
And so, the rise of electric vehicles will not only be negative for the platinum price but also it will be especially bad news for South Africa as 95% of the world’s platinum reserves are found in South Africa. And at least 75% of the mined platinum is exported  - that’s around around R96 billion.
But the proof is in the pudding and right now we can see that the platinum price is under HUGE pressure as prices are near a decade low, as well as at a critical price level which is about to break.
To explain this let’s look at the chart…
Is this chart showing doom for Platinum? Looking at the weekly chart of Platinum, you can see for the last five years the price has been on a continuous downtrend (Red line).
And for the last three years, the price has kept bouncing on a strong support (floor level) at $780 (Horizontal yellow line).
Technical analysts call this pattern a continuation descending triangle (shaded yellow).
This triangle consists of a downward side (downtrend) as well as a horizontal side (support) level.
Now that platinum is 3/4s to the apex, soon we can expect a break to the downside where we could see a 53% drop in price.
To calculate this target we take the difference between the most recent high price and low price and we add it to the low price.
Here's the calculation:
Target = (Low price - High price) + Low price
= ($780 - $1,200) + $780
= $360
This means we can expect a 53% drop from the current levels in the next few months.
________________________________________
“If you want to make a killing from cryptocurrencies – read this book as FAST as you bloody can!”
I’d like to rush you a copy of my book, Crypto Revolution, right away.
Inside you will find everything you need to understand this financial revolution…
And take maximum – potentially life-changing – advantage of it.
Including the name of the coin I am calling “The Bitcoin Killer”…
A cryptocurrency that could ultimately climb 20,000% from where it sits today.
That’s the kind of move that turns R2,500 into R500k over the longer term.
You’ll get the name of that crypto…
My full case for why it could rise to become the #1 crypto in the world…
CLAIM YOUR BOOK IMMEDIATELY
________________________________________
Here are three ways to profit
First you can look to short (sell) a platinum CFD, futures or ETF and hold it until it reaches the target of $360.
Second, you can wait for my next SMS where I'll do the analysis for you and tell you which JSE company is lining up for profits.
I’m talking about companies like Anglo Plats, Impala Platinum and even Eastern Platinum, which we can short (sell) and profit from in the near future.
Third, you can wait for Trader X's trade signal as he looks for profit opportunities on the offshore side of the markets.
Trade well,

Timon Rossolimos,
Analyst, Red Hot Storm Trader
P.S: Did you know Trader X is on a winning streak of five trades in a row and his trading strategy is on fire! Make sure you don't miss the next winner. Read more here.
Tags: timon rossolimos, electric vehicle, sales, platinum, resources,

Why Platinum Is Doomed?
Rate this article
Note: 3.5 of 3 votes