Keep your hands off my pension 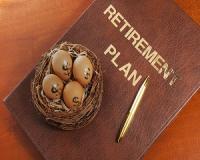 If you're in your 50's you might have heard of ‘prescribed assets' before - for millennials this term might be ‘foreign'.

But it is very actual - in fact it's from the 1980's and it was part of the Apartheid government playbook.

In short - the government back then forced pension funds through legislation to invest up to 77.5% of their funds into parastatals and government bonds.

Now heed my words, if there's one thing you have to do today it is read this article. As with so many things - it seems the SA government of the day wants to repeat history - and is mulling over prescribed investments again…
________________________________________
Claim Your FREE Copy of My Book Below
Inside you’ll find 10 life-changing ways to build your
income and wealth automatically, including…
• How you can pocket an extra R2,000 tax free a month from the one investment most financial advisors ignore
• The passive investment plan that will ensure you never ever run out of money
• The secret strategy long term investors use to keep R400,000 in gains out of SARS pocket and in their hands
• The one investment that gives you quadruple the return of any share and is safer than bonds!
Today, I want to send you a FREE copy of my new book.
________________________________________
The ANC’s election manifesto says it will investigate the opportunity of looting pension funds
In its 2019 election manifesto the ANC said that it will  “Investigate the introduction of prescribed assets on financial institutions’ funds to mobilise funds within a regulatory framework for socially productive investments (including housing, infrastructure for social and economic development and township and village economy) and job creation while considering the risk profiles of the affected entities”.
In short – ESKOM, SAA and the Post Office (together with many other state owned companies) are broke.
Foreign investors aren’t willing to borrow them more money.
So the ANC wants to FORCE your investment manager to invest in bonds of these state owned companies to fund them. Whether your investment manager wants to or not…
The Apartheid government showed us this tactic is BAD for investors.
And there simply aren’t cases where this has been a roaring success. The fact is – investors should be allowed to decide what happens with their hard earned money. Not governments.
Prescribed assets could destroy your investments
So here’s a best case scenario:
Assume that 50% of assets are prescribed (this number is lower than at any point between 1956 and 1989) and this leads to a 1% per annum lower return for your pension, this would result in the average pension fund returning 3% above inflation rather than 4%.
Or to put that in other terms, the average person would have to work and save for two years and eight months longer to reach the same retirement goals over 30 years – working to almost 68 rather than 65. Or they would have to be content with a 16% smaller pension fund at 65.
But what would the worst case scenario be?
Well - your pension fund could be forced to invest more and more money in failing state enterprises. You could be financing bonuses for unproductive workers and directors.
And eventually debt holders could be forced to ‘write down’ some of the debt owed by these state owned enterprises to avoid bankruptcy.
We all know the current problem with state owned companies and their financing deficits has nothing to do with a shortage of investors that are able to invest. It has everything to do with a lack of transparency, corruption and governance problems…
Government already controls your pension to some degree
Ever heard of ‘Regulation 28’? If you’ve got a Retirement Annuity regulation 28 controls what your fund manager is allowed to invest in, and what not.
Regulation 28 of the Pension Funds Act already prescribes limits in terms of particular assets/asset classes. The main limits are 75% equity, 25% listed property, 10% hedge funds and 30% in offshore assets (the last of these is a limit prescribed by the Reserve Bank).
So you are already limited from taking money out of the country.
But it would be an easy step for government to start by adding a 30% minimum investment in bonds into this requirement.
The total pool of South African pension savings funds sits at more than R4 trillion.
So 30% of that would be enough to alleviate much of government’s debt problems for the time being…
But this still won’t solve the problems. State owned companies need to be fixed – before they get another cent.
________________________________________
The very next SMS you receive could
make you R1,558!
550 people ALREADY have my number in their address book - and since I started SMSing them, they've made thousands in profit  in the last few weeks alone.
Now it's YOUR turn to see how much you could make!
Best of all, you don't need ANY previous experience, hard work or special equipment aside from a stick-standard cell phone.
Just add me to your contacts today - and you could be collecting your first pay outs by the end of the week.
________________________________________________________________________________
What should you do as an investor?
Firstly – you should question yourself regarding where you put your money. Yes, the tax benefit you get from investing in a pension fund or RA is worthwhile.
BUT – investing your money in a vehicle that government can easily interfere with is a risk.
And in South Africa today it is a risk you HAVE to manage.
So – only invest the most crucial amount into an RA. Don’t put in extra.
You can rather invest extra amounts in offshore funds (outside of your RA), or in unit trusts where government can less easily affect your investments and you can withdraw your money if you need to.
Secondly – You should contact your financial advisor. Ask them to contact the company managing your pensions, and provide you with answers on their stance about prescribed investments and whether they are lobbying government not to institute them.
If thousands of investors do this – fund managers will be forced into action. And if your advisor cannot provide you with satisfactory answers… Well, should they then continue to be your advisor?
Here’s to unleashing real value,

Keep your hands off my pension
Rate this article
Note: 3.58 of 6 votes