A list of 2020's biggest losers... Plus the only stocks you should have on your radar right now! 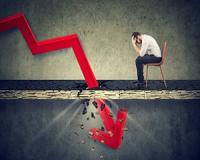 The effect of the Corona Virus and its panic has been huge on our, and other markets around the world. On average these 15 companies have lost 74% of their value. Sasol’s definitely been the biggest loser of the lot in rand terms – with the company losing more than R200 billion in value this year alone!
Other than corporate scandals (such as Tongaat Hulett for instance), what’s been the common thread with these companies?
It’s high debt levels.
Simply put – you don’t want to own a company with high, or close to unsustainable debt levels in the current economy.
That’s because a business with loads of cash can weather the storm and continue like normal after the crash. But a company with scary high debt levels might not be able to weather the storm…
Or, in the case of Sasol, the company could be required to do a rights issue to raise the required cash – effectively erasing upside potential for existing shareholders.
Right now, I wouldn’t rush out and buy yet. I think there's still some  panic that could set in with the progression of the pandemic. But the time to start buying up bargains will return…
________________________________________
In Just 7 Days You Could Have Banked 15.80% on Merck, 51.57% on Brent Crude and 323% on US 500!
And you could have made these gains from the smallest market moves – DOWN or UP!
Don’t miss your chance to pickpocket the financial markets for 3 months, totally RISK-FREE
________________________________________
The best shares to buy right now – the ones that could provide you with ‘certain’ profits
Because of all the panic selling there are some companies shares that have crashed – when in fact there’s significant ‘guaranteed’ upside potential.
Take Metrofile (JSE: MFL) for instance. The company is under offer by an acquirer for 330c a share – and the share traded at 265c today. That means when the deal is finalised in the coming month or two you’d receive a 24.5% return – with very little risk.
Or take Assore (JSE: ASR) for another example – the company’s share price today trades at R287 while its core shareholder has offered to buy ALL shares in the company from existing shareholders at R320 a share. That means you buy today and pocket a 11.5% return in two months at very little risk.
10%, 20% or 30% doesn’t sound like a massive return now – but compared to the wider market’s 28% drop for the year it’s very attractive.
And at least if you can grow your bank balance by 20% or 30% in the next two months, you have a bigger base to buy with as the crisis bottoms out…
In the meantime, stay safe and stay calm.
Here’s to unleashing real value,

A list of 2020's biggest losers... Plus the only stocks you should have on your radar right now!
Rate this article
Note: 3.73 of 40 votes