Market Movers and Shakers - 3 to buy and 2 to sell 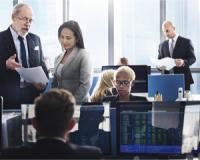 Yes, we have mentioned Steinhoff before, the stock has fallen significantly since June. They will release financial results later this week. We expect more clarity on the impact of Brexit and the acquisitions. Positive results will give the current price a lift, Buy Below R64,00.

The whirlwind in healthcare stocks found its way to Netcare last week, the share was down almost 10%. This follows a general sell-off in the sector and NetCare was already significantly oversold, Buy at R30.

Platinum has settled close to $920 per once, Impala shares have fallen back to the low R40's. Market conditions are expected to improve and Impala has several projects that will contribute to higher production in 2017.

Oil markets still have a glut of supply and it will take more cuts to change that. The announced cuts are temporary and the likely scenario is that Oil remains range bound. It is now at the top of that range and we would sell again at current levels.

This resource company has been blowing hot and cold – watch out

Admittedly, Kumba was unjustifiably smashed to R27 in January with all resource counters . A case of throwing the baby out with the bath water. Now back at R170, the meteoric rise is equally unbelievable. Iron ore prices remain subdued, the share has downside risk here. Take profits or sell for a pull back to R140.

Local Markets were battered last week leaving the JSE down 3.1%
The JSE felt the overhang of a potential S&P Rating downgrade last week, the major Indices were down across the board with the Alsi 40 fell 3,14%. The Alsi 40 is now down 6,5% for the year to date.
Concerns continue regarding fiscal restraint so lacklustre economic growth look likely to remain major hurdles into 2017.
Brent Oil up 15% on news from Opec
Opec announced it would cut production by 1,2 million barrels per day from 1 January for six months. And non-Opec Members have tabled a proposal to cut production by 0,6 million barrels per day.  The price ran 15% during the week.

P.S. To get in touch with Guy and his team and learn more about any of these shares, simple email him on Guy@prodigyam.co.za and remember to mention you are an FSPInvest subscriber to qualify for the best rates.
Guy Algeo is Director of Prodigy Asset Management.
Guy@prodigyam.co.za

Market Movers and Shakers - 3 to buy and 2 to sell
Rate this article
Note: 5 of 1 vote