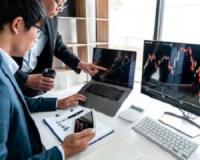 Early on in the COVID-19 pandemic there was a ‘nerdy' accounting joke doing the rounds saying that soon we'd see EBITDAC - Earnings before interest, tax, depreciation, amortisation and corona.

While there's no ‘official' accounting term like that - companies results do show the effects, the pandemic has had on them. And many are opting to call it ‘once-off expenses.

So, here's what you need to look out for…
________________________________________
You may never see value on the stockmarket quite like this ever again!
Right now, there are a handful of little known stocks at the most attractive levels they've been in a decade:
• A Precious metals producer that's turning mine dumps into money - and it's just signed a deal to get its hands on a 150 million tonne copper opportunity in Africa
• A Pharmaceutical and healthcare company that's capturing the entire value chain from medicine and PPE to medical aids, and health insurance - and even though you've probably never heard of it - it serves more clients than Discovery Health!
• A niche manufacturing company that's literally DOUBLED its footprint in Europe over the last couple of years - and now its expanded with another offshore acquisition
• An essential logistics provider that's paying one of the largest dividends on the JSE - whilst still growing its business year on year.
• An up and coming transport company that's making big money from government's failures in the public transport space
I’ve identified these 5 local companies I believe could double in share price or even more over the next 24 months! You can learn more here.
________________________________________
Two financial terms to look out for when you’re investing in companies right now
Financial term #1 – Once off expenses
Once off expenses can point to a number of things. But basically, directors tend to use them to say that if X didn’t happen, the company would’ve made a much bigger profit. Obviously the X in our current situation means that if Covid-19 didn’t happen – companies would’ve made bigger profits…
But Covid-19 happened. And companies now have expenses to deal with.
So, what is a once off expense? Well, this year most companies will be faced with the massive expenses of PPE like masks and sanitizers for their employees. These would likely be termed once off costs, because they are unlikely to be normal costs under ordinary business conditions going forward (unless we have to go on like this for years).
Other once off costs could also include retrenchment packages. When a company retrenches employees to secure cash flow, it has to pay out a retrenchment package to said employees with a negative short-term effect on cash flow. We’re also likely to see a lot of this in 2020/2021.
Most of the time though once off costs are still REAL expenses that have an effect on cash in the bank – and should not be ignored. More importantly you should make sure companies aren’t sneaking in actual expenses as once-offs.
Financial term #2 – Goodwill impairments / write-offs
Goodwill impairments and write-offs are a special type of once-off costs. They can be very important – but sometimes they don’t make much of a difference overall.
The most notorious lately has been Sasol’s R112 billion impairment.
So, what is an impairment?
Investopedia defines it as a “Permanent reduction in the value of a company’s asset due to an unusual or one-time event such as a change in legal or economic conditions, change in consumer demands or damage that has impacted and asset”.
In Sasol’s case the company’s massive impairment was due to a number of reasons. The oil price crashed to its lowest level in a decade. Immediately this means that virtually all of Sasol’s operations will not be as profitable in the future as before. Because of this there is a large amount of value wiped off the company’s books immediately in the form of an impairment.
Similarly – an accident at one of Sasol’s operations in the US has also caused delays at the operations further creating loss of value.
As opposed to once-off costs, impairments and goodwill write-offs are typically ‘paper’ transactions and don’t reflect physical losses of money from a bank account. But for instance, if there’s a mine accident with a section of the mine caving in – there’d be an impairment but it would represent a ‘real’ loss to shareholders as well.
What you need to pay attention to here isn’t necessarily the effect the paper transaction has on profits, but rather what the effect will be on profits in future years.
________________________________________
Are you ready for the next quarter of profit taking?
If you missed the last quarter, you’re in luck for the next.
Basically, Timon’s weekly profit strategy has been outperforming most markets recently.
He’s generated double and triple digit gains in as little as 2 weeks.
And month after month, the gains just keep on rolling in.
Take a look at the last three months: But I think you ought to see the proof for yourself.
Go here to test this service for 90 days risk-free.
________________________________________
How to know what profits look like considering Covid
When profits are reported they’ll be in the form of EPS (earnings per share) and HEPS (Headline earnings per share) and sometimes there are things like NHEPS (normalised headline earnings per share).
EPS shows you the ACTUAL profits. But remember – they can include paper losses due to impairments, as well as once-off costs. So you might want to look at HEPS as well, to see what profits would’ve looked like without retrenchments and massive PPE purchases. This still wouldn’t explain the loss of sales due to the lockdown.
In short – Covid has had a massive effective on businesses in the past months, and you need to consider that when investing in companies. Considering the factors I explained above it’ll be easier to know what will have a permanent effect on businesses, and what is a fleeting cost. But whatever you do, don’t ignore it.
Here’s to unleashing real value
Francois Joubert
Editor, Red Hot Penny Shares
P.S. I have just released details on 5 of the best value penny stocks on the JSE… If you want to get your hands on them right now, go here.
Tags: francois joubert, investing, stocks, accounting, financial terms

Why you need to be wary of this accounting trick before you invest in stocks
Rate this article
Note: 5 of 2 votes