How to make money off America's favourite past time 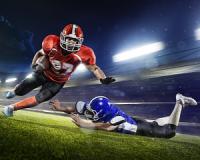 The NFL is one of America's favourite past times.

Now I know you're probably not all too familiar with the game, since we are a proud Rugby nation.

So from The Winning Streak Team, I want to show you how you can make money from America's favourite sport.

So let's start at the beginning


The men who control all the on-field mayhem

I’m sure you’ve seen that one guy on the side of the field, screaming into his headset while covering up his mouth. They are playing a physical game of chess, with each player on the field as their chess pieces. They have their own unique set of speciality’s the coaches use at their benefit. And just like every chess game, every move is noted and recorded for study later on. This is one benefit to the game of Football and its where statistics successfully contribute to a winning forecast, game after game. With soccer, the ball is passed sideways, backwards and forwards, with American Football the balls main objective is to go straight.

The one stat you need to know

With Statistics you can draw a clear picture of what might happen. All the statistics are done for you, with the NFL compiling huge amounts of stats on every game, all you need to do is note them and pick out the most important ones. So as I’ve made clear the main objective is to move the ball forward. What you need to know is how efficient a team is doing this. Knowing a team’s efficiency is different from knowing the amounts of points they scored in a particular game as well as the yards gained. A more efficient team will more than likely beat a team that’s not. You’ll find this by looking at ‘Average Yards Gained’ per play.


How to use ‘Average Yards Gained’ to help you find winners

You can find these stats very easily, just google “NFL Sats” and you’ll find sites such as www.teamrankings.com or even www.sportingcharts.com. Now, during the past week, the New England Patriots played the Houston Texans. New England had an ‘Average Yards Gained’ of 5.7 while the Texans had a 4.9 ‘Average Yards Gained’. So as you can see there is a difference in the ‘Average Yards Gained’ of 0.8 yards. While the score clearly shows they were a much more efficient team winning Patriots (27) – Texans (0). Although for the sake of this article I have only looked at two teams, you will have a much better gauge when looking at many games over a period of more than four to five games. Bottom Line: It’s rare to find a ‘sure thing’ in the sports betting industry, but with some statistics to back-up your bet you can be sure to pick up some nice profits this NFL season. Never bet on a whim, make the best educated guess. Until next time, Christopher Ammon
Tags: sports betting, bet on american football, sport bet, sports bets

How to make money off America's favourite past time
Rate this article
Note: 5 of 1 vote