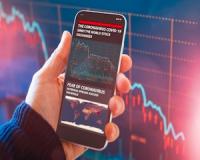 March 2020, will be known as one of the most brutal months that the JSE and the equity markets have ever seen.

CEO - JSE, Leila Fourie, said in an interview about the value drop and trade volumes:

“Over the past few weeks on average we've been processing more than 700-thousand trades a day. You can imagine the kind of pressure that puts on both back office systems as well as the trading systems.”

With the selling pressure overweighing the buying pressure, both new and old investors are dumping their positions and going back into cash.

This will lead to a drop in the JSE, which will drive stocks further down in the future.

And now thanks to uncertainty with the COVID-19 national lockdown, recession fears and with Moody's sudden downgrade, I believe the ALSI is ready to plummet another 25%...

Here's why and how I plan to profit with the plunge.
________________________________________
HOT UPDATE:
Pickpocket Trader just closed a massive 323% gain on the US 500…
In the same week,  his followers could've banked another 51.57% % on brent crude and 15.8% on Merck!
Read on to find out how you can get in on the next big gain!
________________________________________
South Africa has been downgraded to Junk!
Just over a week ago, the ratings agency Moody’s decided to downgrade South Africa’s sovereign credit rating from BAA3 to BA1.
This takes South Africa to sub-investment grade, which is also known as junk status.
The main reasons for the downgrade, according to Moody’s, was due to the unreliable electricity supply, a weak economy, lower business and investment confidence.
This downgrade will lead to South Africa being kicked out of the FTSE100 WGBI (World Government Bond Index) of local-currency debt.
Analysts now estimate that, investors are expected to dump between $4 billion and $10 billion worth of capital (rand government bonds) from SA’s bond market.
Even Geoff Kendrick, London-based head of emerging-market currency research at Standard Chartered said…
“Outflows could total anywhere between $4 billion and $10 billion”
This downgrade status will increase the cost of capital, cause lower investment confidence and the economy will be negatively affected, which will bring the JSE down further.
And Tito Mboweni said,
“The sovereign downgrade will further add to the prevailing financial market stress”
COVID-19 is disrupting the economy – with no end in sight
With majority of shops, restaurants, businesses and even clubs at a standstill, I believe there are two major issues arising.
First – Our economy is struggling as people are losing jobs, less money is flowing into the country and foreign investment is falling (now with Moody’s decision).
With the sudden downgrade along with the recession fears and economic collapse from the national lockdown - This will add to the negative outlook for weak economic growth, which will cause further panic selling.
And when we look at the JSE All Share Top 40 index (ALSI40), it looks like we are about to experience another 25% drop.
Take a look at the chart below…
Why I expect another 25% drop on the JSE thanks to COVID-19, Moody’s downgrade and the future unknown.