How to profit from the ALSI40's ‘Blue Diamond' 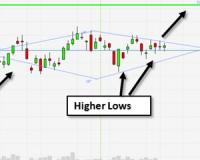 If you ask any trader how trading is going on the JSE, you'll hear the same thing.

“The JSE can't decide on direction”

So whether you buy or sell, chances are you've got it wrong!

But if you know how to read a ‘Blue Diamond', you would know how to profit in this environment.

Let me show you what I mean…

What you need to know about the ‘Blue Diamond’
A Diamond formation also known as the “Blue Diamond”, is probably the most under-used chart pattern  on any financial market.
It’s the formation that confuses traders the most simply because it’s a sideways pattern that doesn’t move with a specific trend direction.
By this I mean, the sideways pattern will either break-out to the downside or upside.
You see, in technical analysis, there are two patterns traders look at…
Continuation patterns and reversal patterns.
A continuation pattern occurs when  the price breaks out of a range and continues to move in the direction before the pattern formed.
With a reversal pattern, you’ll see the price will break out of a pattern and move in the opposite direction of the previous trend.A Diamond formation can be either a continuation pattern or a reversal pattern.
You’ll tend to see a Diamond formation with any financial instrument that has high buying and selling (high liquidity).
Right now, a ‘Diamond formation’ has formed on the JSE and there’s a way you can profit from it.
This Blue Diamond is ready to shatter to new highs

You’re looking at the daily chart of JSE the Top40 (JSE_ALSI40).  Since 2 August, a ‘Blue Diamond’ has been forming (as you can see illustrated in the chart).
But which direction will it break? Will it continue to the upside like the previous trend or will it reverse to the downside.
I can explain this with two scenarios.
Gatvol! Don’t envy investors who make a KILLING from the property market, be one!
Scenario #1: Reversal pattern where we get a break down

Take a look at the graph…
You can see that the previous trend (from July to August) on the JSE-ALSI40 was an uptrend.
Following this,  we saw the Blue Diamond(sideways pattern) form over the entire month of August and September.
So if the price of the JSE-ALSI40 breaks out of the diamond formation to the downside, this means the formation has reversed from the uptrend to the downtrend. This is why it’s called a reversal pattern.
I’ve seen it happen and if it does you’ll need to look at shorting stocks on the JSE…
However, my research shows me there’s a higher chance of the diamond breaking to the upside.
Here’s why…
Scenario #2: Continuation pattern to the upside

This is it: Your ONCE-IN-HISTORY chance to turn just R1,000 into R490,000
A strong market can’t just shoot up forever, there needs to be some form of consolidation between the buyers and sellers. You can think of a consolidation stage as a “taking a break” before it continues to the upside.
And there are two reasons why I expect the JSE-ALSI40 to break up.
The previous trend was up
The diamond formation has showed higher lows TWICE.This tells me that we can expect a strong break to the upside.
I anticipate a 30-50% gain is on the table when this breakout happens.
To make sure you get in on the trade at the right time, you can sign up to my Red Hot Storm Trader service to get the full details on this fast approaching trade.
Sign up for a 90 day trial here.