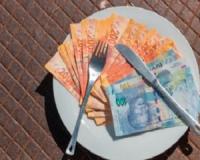 Over the last six months the rand has been an absolute star compared to other emerging currencies.

While the rand has been strengthening to under R14.50, I can't say much about the other emerging currencies.

The Brazilian Real has weakened -8% to the US dollar.

The Rouble has dropped over 4%

And the Turkish and Argentine currencies have weakened over 10%.

The rand on the other hand has strengthened from R19.11 down to R14.46 against the US dollar.

In fact, it is the only emerging currency that has gained ground against the dollar.

In this article, I'll explain why I expect the rand to strengthen further and how we can profit from the rise.
________________________________________
The best track record in our business right now is…
…a trader service called Pickpocket Trader.
It’s on fire! This quarter we've closed 7 winning trades out of 8. With an average 40.83% gain.
To find out how they’re doing it…and the pickpocket trades they’re targeting right now… click here…
________________________________________
Reason #1: The Covid-19 vaccine rollout is looking good
Last week, the Rand rallied after the government announced a huge deal with Pfizer and BioNTech.
These two international companies agreed to supply over 20 million doses of their vaccine which will be delivered in April or May.
We've also seen South Africa prioritize their vaccine efforts to over 250,000 medical workers.
The government also finally reached an agreement with Johnson & Johnson for 30 million doses.
This is bringing great hope for the economy, the people and clearly for the South African rand.
Reason #2: No downgrades in sight
The IMF (International Monetary Fund) is the most recent institution that has upgraded its growth outlook for South Africa from 2.8% to 3.1%.
Even analysts at Société Générale, the Paris-based lender and global investment bank, say they are "tactically bullish" on the Rand.
This is due to two main reasons: First, they believe the drop in global currencies will support demand for the rand.
Second, they too believe there won't be any other sovereign credit ratings downgrades for the country.
Here's what Kit Juckes, Chief Global FX Strategist at Société Générale in London said:
"We are inclined to reload on tactically bullish ZAR positions as global markets move closer to finding a new Developing Markets rates equilibrium environment,"
Let's see what the charts say.
Reason 3: This ‘Descending Triangle’ is showing insane strength for the rand

In the above daily South African rand (USD/ZAR) chart, we can see, since 17 April 2021, the price has been moving in what’s called a ‘Descending Triangle’ (Shaded area).
This is where the price makes lower highs while bouncing on the same low, forming a downward facing triangle.
At the same time, the price has been bouncing on a strong support (floor level) at R14.46.
Each time it touched, it failed to break below.
That was until last week.
Last week we had the breakout showing there was more selling and supply on the US dollar vs the SA rand. This means, traders and investors are selling the US dollar against the South African rand, making the rand strengthen.
If we take the difference between the most recent highs and lows, we'll be able to calculate my next price target.
Price target = Low price - (High price - Low price)
= R14.46 – (R19.11 – 14.46)
= R14.46 – (R4.65)
= R9.81
This means, we can expect the USD/ZAR to drop to R9.81.
It sounds absolutely crazy, and my jaw dropped when I saw this target, to think the rand will strengthen to such a level.
However, the charts have spoken!
________________________________________
Breaking: Why your ‘cash could be trash’ if you don’t act…
________________________________________
Here's how I'll profit from the insane 32% upcoming rand strength to come
First, I'll buy the USD/ZAR CFDs and hold it until it reaches my price target
Second, I'll be looking to buy companies that run up when the rand strengthens.
I'm talking about sectors like retail, banks and industrials. However only my elite members will see these trade ideas. If you're a serious trader, then you can click here to join.
Trade well,
Timon Rossolimos,
Analyst, Red Hot Storm Trader
Tags: timon rossolimos, trading, south african rand, rand, currency,

My jaw dropped when I saw the next price target for the South African rand
Rate this article
Note: 3.2 of 10 votes