REVEALED: The deepest US recession and yet I expect another 27% rally for the S&P500 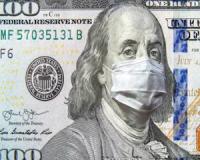 The US economy is in the deepest recession in living memory.

Also, the US Federal rate has dropped from 2.25%, taking the borrowing interest rate to 0.25%.

And yet, in the last quarter, the Dow Jones and the S&P 500 have baffled the world having the best quarterly rallies since 1998.

In the last three months, each stock market has surged more than 20%.

Now I don't exactly know what has caused this positive stock market sentiment and buying, but it could be a combination of the following:

“It's a rally built upon stimulus and vaccine optimism”

Whatever is driving the US stock markets, tells me one thing.

It's just the beginning.

Here's why and how we can profit from the rise.
________________________________________
Recommended: TRANSFORM YOUR WEALTH - How to invest in a post covid world
________________________________________
Reason #1: Pending home sales make record highs
One of the leading indicators of housing contract activity, in the US, is known as the Pending Home Sales Index (PHS).
Basically, the report measures the change in the number of homes under contracts to be sold but still waiting for a closing transaction.
All you need to know is this.
A higher number than expected is a positive sign for the US, the dollar and the stock markets. While a lower number than expected is a negative sign for the US economy.
Recently the Pending Home Sales made its largest one-month jump in history. It surged 44.33% in May compared to April. And it beat expectations by a 15% gain.
With the economy re-opening, recovering and with the stimulus packages being injected, I wouldn’t be surprised to see a further boost in Pending Home Sales for June when the report releases on 29 July 2020.
Reason #2: The largest stimulus injection of all time
Since January, the world’s major central banks have already bought $6 trillion of assets.
That’s more than double the amount purchased during the global Financial Crisis of 2008.
This injection then helped attract investors to buy into high value companies once again. And this helped recover the share prices, over 85%.
Thomas Peterffy, CEO of Interactive Brokers, also agrees with this sentiment as he said:
“if you don’t get into this market, you will never see these prices again because the Fed keeps pumping money into the market and inflation is going to catch up with us very soon and stocks are a safe-haven.”
And now that we are in the 3rd quarter of the year, I think we’ll be seeing the third phase of recovery in July as the Fed prints more money and as the economy continues to re-open.
Reason #3: Largest consumer confidence boost in over 9 years
On Tuesday, a report from The Conference Board, released the Consumer Confidence Index.
This is an economic indicator which tells us how optimistic the US economy is, based on the level of consumer saving and spending activities.
Economists surveyed by Bloomberg, expected the index to jump from 85.9 in May to 90.5 in June.
Instead, the Consumer Confidence in June jumped the highest since 2011, to a staggering 98.1.
Lynn Franco, a senior director of economic indicators at The Conference Board, said:
“The re-opening of the economy and relative improvement in unemployment claims helped improve consumers’ assessment of current conditions.”.
And so, all in all, the US seems to be picking up and the charts show even further upside to come.
Why the S&P 500 is set to rally another 27%

REVEALED: The deepest US recession and yet I expect another 27% rally for the S&P500
Rate this article
Note: 5 of 1 vote