The Next wave of the pandemic is here and the Dow Jones is about to crash... 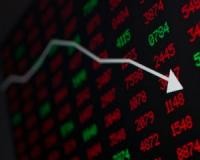 These four words, could be the underlying reasons for a major Dow Jones crash.

I'm sure you felt things were starting to get better, economically, socially and mentally.

The next COVID-19 wave has already hit America and Europe, and it's a matter of time before it comes back to South Africa.

And I'm doing one thing…

In this article, I'm going to show you why I expect a 12.84% crash from the Dow Jones and how we can at least profit from the downside.

Let's start with the first word…
________________________________________
Pickpocket Trader makes 243% gain on one trade
Were you one of the lucky Pickpocket Trader subscribers who cashed in on this huge profit on the Rand?
No?
Click here to find out how you too can start raking in the gains
________________________________________
Word #1: Election
We are just a few days away from the US election.
As of last week Monday, over 61 million Americans already voted.
On 3 November, the American people will either send Joe Biden or Donald Trump to the White House.
And yet, the Wall Street’s fear gauge has jumped to the highest level since 15 June…
You see, there are now major concerns that a winner will not be declared on the day.
This is because the results may likely take longer than in previous years, due to COVID-19. And with voters, voting by mail in never seen before numbers, this means it could take a lot longer to count.
And for that, we saw the Dow Jones plummet over 943 points last week.
This was the biggest one-day plunge since June…
Talking about delays, let’s move to the next word.
Word #2: Stimulus
After the Republicans and Democrats, failed to have reached an agreement on the stimulus bill, things have been adjourned.
The US senate has postponed the event until 9 November.
This has dropped a lot of confidence and increased the level of fear for America (as I mentioned above), as there remains little hope for the stimulus bill to take into effect any time soon.
And just these factors alone, can cause a market to drop due to indecision and uncertainty.
Greg McBride, chief analyst at Bankrate, sums it up very nicely as we enter into the third word…
“The stock market is reacting to a surge in coronavirus cases and a lack of stimulus that together threaten to hamstring the economic recovery.”
Word #3: Resurgence
The Coronavirus saga has once again caught the market’s attention – in a big way.
The total number of COVID-19 cases in the US toppled over 9 million last week Wednesday and over 44.6 million world-wide since the outbreak.
In fact, last week the hospitalizations in the US related to COVID-19, rose by 10%.
And on Tuesday, there were over 73,627 new cases reported…
Worse yet, the next wave is hitting America for the first time while they enter into a cold season.
And during winter, the immune system weakens.
Here’s what Anthony Fauci, director of the National Institute of Allergy and Infectious Diseases, had to say in a CNBC interview:
“This is going to get worse,” “Because we’re going into a colder season...we’ve got to do something different. We can’t just let this happen.”
And finally, we need to look at the most important factor which tells me the Dow Jones is set for downside…
Word #4: Rectangle

You’re looking at the daily chart of the Dow Jones.
You can see that since early June until October 2020, the price has been jumping between a high and low range of 13,305 and 11,790.
And during this time, it’s formed a reversal breakout pattern I call – the Rectangle (Black shaded area).
Last week, the price broke below the Rectangle for the first time since June, which told us selling was kicking in…
And if we consider the above factors as well as the breakout to the downside, there is a very good chance that the Dow Jones is about to fall off its horse.
In fact, we can use the High-Low calculation to find its next price target.
Price target = Low - (High - Low)
= 11,790 - (13,305 - 11,790)
= 10,275
This means, the Dow Jones is set to drop to 10,275 which we can take advantage of.
________________________________________
I'd like to send you THREE specific investment recommendations based entirely on this secret for free
It’s how Warren Buffett built his $80.5 billion fortune!
It’s how Sir John Templeton quadrupled his money...
And how Walter Schloss (you’ve probably never even heard of him) took home R190million in a year.
It’s perhaps the most unfair advantage an investor can have in the markets.
And now it’s available to you!
________________________________________
Two main ways to profit from the 12.84% Dow Jones crash
First, we can short (sell) the Dow Jones CFDs and hold it until the price drops to 10,275 where we can re-buy it for a decent profit.
Second, we can profit on the go from Trader X’s international trade ideas. In fact, he told me recently that a number of trades are lining up with regards to the current global markets crash (including the Dow Jones).
You don’t want to miss these trade ideas as he is currently on a winning streak of 5 trades in a row!
Trade well,
Timon Rossolimos
Analyst, Red Hot Storm Trader
Tags: timon rossolimos, trading, investing, dow jones,

The Next wave of the pandemic is here and the Dow Jones is about to crash...
Rate this article
Note: 4.57 of 7 votes