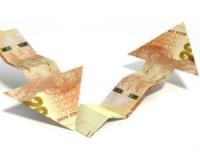 South Africans are at the edge of their seats, with what's going on this year.

From the ongoing US-China trade war, never ending Brexit decision, South Africa going back into the dark ages, the spreading rumours that the US is about to enter a recession this year - and this is just the tip of the iceberg for 2019.

The worst is yet to come. And it all starts, and ends, with the rand.

To explain this better let's discuss the three top risks for the rand in 2019 and how we can profit.

Let's get started.
Recommended:
________________________________________
6 Shares Set to Rocket in 2019
Read this now, or miss out on THE buying opportunities of the year.
You could make a fortune with these 6 potentially explosive shares hand picked by our market expert.
And we'll give you all the exciting details in this FREE Red Hot Report
Take A No Obligation Trial of My Advisory Service and Get Immediate Access to My Full Research on these Six “Wealth Explosion” Stocks Today.
________________________________________
Risk #1: Moody's to cause massive panic to the rand
In October 2018, in the Budget review, finance minister Tito Mboweni predicted there would be wider budget deficits and growth forecasts with lower spending on manufacturing, agriculture and infrastructure.
This created fear that the economy would weaken, which would have a negative impact on the rand.
The reason why I'm bringing this up today is because of what Christopher Shiells, emerging markets analyst at Informa Global Markets, stated about these concerns.
“These challenges may lead to a sovereign credit rating downgrade from Moody’s in March if the 2019 budget does not allay any lingering concerns,”.
You see Moody's, one of the major ratings agencies, is the only one left holding South Africa's debt at "investment grade" and not "junk status".
If debt is downgraded from "stable" to "negative" at the end of March 2019, this will trigger a massive outflow of investments which will lead to a weaker rand.
Economists and investors fear that with the ongoing problems with Eskom, this could be the final catalyst that will lead South Africa to being downgraded to "Junk status".
The problem is if Moody’s downgrades us, South Africa will be taken off the Citi World Government Bond Index.
You can only imagine what effect this will have on the sentiment for foreign investments in South Africa and the negative impact on the rand.
They will force them to sell their SA government bonds triggering billions of rands in capital outflows.
Risk #2: The president wanting to nationalise the South African Reserve Bank
It’s been decided by the South African ruling party, in March 2019, to nationalise the South African Reserve Bank.
President Cyril Ramaphosa told Parliament in Cape Town on Thursday, “We have to go through processes” and “There is no hidden agenda”.
What’s important to note is South Africa’s central bank is owned by private investors with external shareholders who live in different countries around the world.
There are a number of issues that will cause a negative impact on the rand namely, Nationalising the SARB will affect the transparency between international private shareholders, who will no longer have any say over policy decisions, and the appointment of the monetary policy committee, to be able to help with management or receive any answers to questions at AGMs.
Risk #3: The charts agree with the imminent falling of the rand
Here's why I expect the rand to weaken to R15.30 ​
If you look at the weekly chart of the South African rand (USD/ZAR), you can see that since September 2018, it's strengthened from R15.50 down to R13.30.
However, for a technical analyst it has strengthened in a bearish (down) pattern called a 'Falling Wedge'.
There are two characteristics that make up a falling wedge.
First is the flag pole (Red line) where price moves in a strong uptrend.
Second is where the price then constricts into a triangular or flag pattern (Pink lines), showing a short pull back before its next up move.
Now the South African rand has broken above the wedge pattern (Blue circle). This tells us that there is upward buying pressure (demand) on the US dollar against the rand.
This means we can expect a rise in the USD/ZAR back to R15.30 (at the top of the wedge).
Recommended:
________________________________________

Important! If you’re retired or even nearing retirement, you need to check this out right away.
________________________________________
Here's how to profit from the weakening rand
The main resource companies, in South Africa, export their metals in US dollars. So, when the rand weakens, we can expect resource stocks to fly in price.
At the end of the first quarter of 2019, we closed six winning resource CFD trades banking us over 200% in gains.
And with the impending rand weakness to continue, I expect us to bank even more gains with the resource sector to come.
“Wisdom yields Wealth”

Timon Rossolimos,
Analyst, Red Hot Storm Trader
P.S: If you'd like to join us and bank consistent profits with these no brainer resource companies as the rand weakens, then click here.
P.P.S: If you’d like a stock, index, commodity or even a crypto currency analysis, feel free to ask me at any time at Timon@fsp.co.za and you may be featured in one of our Monday Trading Tips articles.
Tags: timon rossolimos, rands, moody's, risk, south african reserve bank, rand