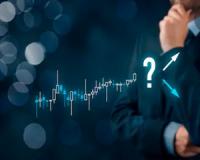 Q. "Timon with Joe Biden becoming the next president, what are your thoughts on energy and oil prices?"
A. For a short answer, I have never been more bullish (positive) with oil and the energy sectors.
You see, with the Donald Trump administration there were ongoing trade wars and tension with China over the last four years.
And for this reason, we kept seeing oil and energy prices continue to drop to unprecedented lows. In fact, the financials and energy sectors were some of the worst performing industries with Donald Trump as president.
And metaphorically, I feel the tension was released as Joe Biden was congratulated by the Chinese president. And that one photo with them shaking hands, brought upon a lot of optimism for investors and traders with how both presidents plan on doing business over the next four years.
In fact, we saw stock markets across Europe and South Africa rise more than 4%. And we saw Asian markets climb over 1%.
But it's not only because Joe Biden and Harris will be taking over administration which will boost energy, oil and financials.
It's also because of the news that was released where a COVID-19 vaccine with an effective rate of 90% could soon be FDA approved and distributed to the officials.
These are all signs that international trade and travel will be returning soon. And this will help boost the economy, financials, oil and energy prices and stocks.
In fact, already I see trades lining up in the energy sector for my Red Hot Storm Trader service.  And Trader X is seeing positive signs with BP oil and other international stocks with Pickpocket Trader. The future is looking bright once again.
________________________________________
Five consecutive trades in a row
yielded a massive return on margin of 420.38%
• In only 8 days you could have made a gain of 243.9% from a 1% increase in the Rand Dollar.
• In just 23 days, you could have made a 21.98% gain from a stunning long play on GBP/JPY.
• With the powerful leverage in pickpocket trading you could have made a 111% gain in just 15 days betting on the pound against the ozzie dollar.
Sound too good to be true? Find out more, here
________________________________________
Q. "I've been taking loss after loss since the end of September. I'm now almost on the verge of throwing in the towel. Can you maybe give me some pointers on how I can minimise my losses during this s#*t trading period?"
A. You're most definitely not alone Clark. I have also had a negative quarter for the first time this year.  In fact, I was down about 7% of my portfolio three weeks ago, before I started managing my drawdown (down) period.
I have four ways you can cut your losses during the difficult times.
#1: Lower your loss per trade
If you've picked up you're in a bad market environment, there's a very easy trick to cut your losses.
Simply, lower your risk percentage per trade by half. So, if on average you risk 4% of your portfolio per trade, drop that risk down to 2%.
This way you'll be able to handle more losses physically and mentally, without causing a big drop in your portfolio.
#2: Limit your number of trades at a time
If on average you hold around 8 trading positions at a time, if you take losses on all of them you'll be down quite a bit on your portfolio.
So instead, during a drawdown phase, drop the number of trades you hold at a time.
I personally never hold more than four trades in a bad drawdown period.
You'll find it a lot less stressful holding less trades during this time as well as you'll take fewer losses.
#3: Diversify your positions
This one has helped save my portfolio many times. If you find you're predominantly long in the market, you can do this.
Stop buying trading positions and instead, look for trades where you can short and are coming down.
I did this when I was long three resource stocks and the market was dropping. I then shorted two resources (BHP Billiton and Anglo Gold) and those two stocks took me out of a drawdown and back in the positive.
#4: Trail your stop loss
The final step you can do to reduce your losses, is to protect your gains. I do this very often with Red Hot Storm Trader. This is when a trading position is moving in my favour and I decide to adjust my stop loss.
And so I move my stop loss to the price point where I cover my costs and I make a bit of profit.
You'll also feel less stress knowing, you have nothing to worry about should the trade turn against you.
Trade well,
Timon Rossolimos,
Managing Editor, Trading Tips
Tags: timon rossolimos, trading, qa, joe bide, election,