WARNING: Last week's announcement could cause a 12% crash on the JSE 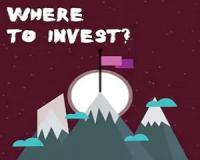 Over the past year we've seen a number of factors drag the world economy down.

From the sudden cut in interest rates in September, to the ongoing war with Brexit and with the US-China trade war, to the oil output being decimated by a drone attack in Saudi Arabia…

We are now seeing the aftermath and the ripple effect, unfortunately hit home…

In fact, we had an announcement last week with all that's happened which could be the reason we drop another 12% on the JSE this year.

Unfortunately, we can do nothing about it but to find ways to profit during the next downfall.

Today we'll discuss why I expect the JSE to drop 12%and how it's confirmed in the charts.

________________________________________
A sad week for global markets including the JSE
Last week the European stock exchange and the JSE had a difficult time following the release of disappointing economic data with Germany’s latest PMI (Purchasing Managers’ Index) numbers being released.
The PMI dropped to its worst level in the past 10 years.
To put it simply, the PMI is a survey amongst the economy’s purchasing managers which is one of the most timely and accurate measures of the economy and how its performing.
Just to understand - a reading above 50 shows expansion and a reading below 50 indicates a contraction with the purchasing of goods and services.
Last week, analysts expected it to dip to 51.4 but were highly disappointed when the actual result of the PMI reading came in at 41.4.
It is the first time since April 2013, that the reading has fallen below the 50 mark showing it has moved from a growth phase into a contractionary territory for the eighth month in a row.
It is also the fastest dropping rate for new orders of goods and services since June 2013.
Phil Smith, principal economist, at IHS Markit mentioned,
“The manufacturing numbers are simply awful.
“All the uncertainty around trade wars, the outlook for the car industry and Brexit are paralyzing order books, with September seeing the worst performance from the sector since the depths of the financial crisis in 2009.”
This manufacturing data result also coincided with a shrinking economyin the second quarter of 2019. This marked Germany’s entery into a technical recession.
Claus Vistesen, Chief Eurozone Economist at Pantheon Macroeconomics also had similar sentiment as he said,
“These headlines are ugly, and more-or-less confirm that the German economy entered recession in Q2 and Q3. Uncertainty over global trade, and the tariff stand-off between China and the U.S., are now driving a deterioration in German manufacturing, which is as bad as during the 2008 crash,".
And as I mentioned, we are now feeling the aftermath..
According to the JSE, foreign investors were net sellers of South African stocks on Friday for the fourth day.
They sold over R3.28 billion worth of shares which is now putting pressure on the rand breaching R15.00 per US dollar.
And once again, the charts agree there’s major downside to come for the JSE.
How ‘3 Deadly Mountains’ could result in a 12% crash on the JSE Looking at the daily chart of the JSE All Share Index (ALSI 40), it has formed a pattern known as three rounding tops what I like to call the ‘3 Deadly Mountains’.
The ‘3 Deadly Mountains’ is a pattern with three consecutive curves showing lower high peaks after another.
The first, second and third high prices (mountain peaks) formed in April, June and September 2019.
Each new peak (high price) that formed reached a lower high price than the previous peak. This tells us that there is less demand and buying pressure and higher selling and supply.
And once the price breaks below an important floor level (support) below 48,460, we could start to see panic selling which could result in the market crashing over 12.11%.
To calculate this target for the JSE-ALSI, we’ll use the high-low method. This calculation basically, subtracts the low from the difference between the high and low price of the middle mountain peak.
Here is the calculation.
Target = (Low – High) + Low
= (48,460 - 54,329) + 48,460
=  42,591
________________________________________
“The COIN KING that could turn R500 into R110K!”
I’d like to rush you a copy of my book, Crypto Revolution, right away.
Inside you will find everything you need to understand this financial revolution…
And take maximum – potentially life-changing – advantage of it.
Including the name of the coin I am calling “The Bitcoin Killer”…
A cryptocurrency that could ultimately climb 20,000% from where it sits today.
That’s the kind of move that turns R2,500 into R500k over the longer term.
You’ll get the name of that crypto…
My full case for why it could rise to become the #1 crypto in the world…
CLAIM YOUR BOOK IMMEDIATELY
________________________________________
How can we profit from the 3 ‘Deadly Mountains’ on the JSE
With the 12% fall on the JSE to come, we can expect to see a number of shares falling in the main sectors including: the banking, insurance and retailer sectors.
In fact, we are already in the money with a short (sell) profit opportunity with Shoprite, which we’ve shorted with Red Hot Storm Trader…
Trade well,

WARNING: Last week's announcement could cause a 12% crash on the JSE
Rate this article
Note: 5 of 5 votes