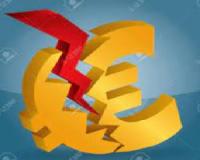 The next time you travel to Europe, it might be very affordable.

You may actually be able to travel to the hotel of your choice, eat at any restaurant and enjoy the tourist attractions without hurting your pocket.

I'm in Greece right now for a few months and I've got myself a little place in the heart of Athens and I must say, all furniture, appliances, TV and other accessories are super cheap at the moment.

And I think things are about to get even cheaper.

In fact, I expect at least another 25% plunge for the Euro in the next few weeks.