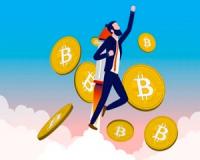 In just a few short months, the price rocketed to the price target and then some.

In this article, I'm going to present my first major prediction for Bitcoin and how I expect it to rally to over $73,000 thanks to four main reasons.
________________________________________
364 investors exposed to a 109.89% gain
– Were you one of them?
One month ago, one of our analysts released a time-sensitive "strong buy" recommendation to a few lucky subscribers. He believed the market was going to start strengthening and that his tip would give readers the opportunity to profit immensely from this movement.
Boy was he right!
In a matter of a few short days, his tip hit its target – producing a phenomenal 109.89% for the lucky few who got in.
Sadly, you may not have been one of them. Ensure you don’t get left behind on his next great tip…
________________________________________
Reason #1: Investment firms are piling into Bitcoin
Bitcoin funds are picking up in volume.
A recent report last week from, CoinShares, a digital-asset manager showed that Bitcoin funds and investment products drew R6.1 billion last week making a new record…
This was due to…
Reason #2: Major companies and billionaires are investing in Bitcoin
I mentioned a few months ago, that PayPal announced its support in crypto-currencies.
In such a way that they incorporated and adopted Bitcoin into their payment system. This attracted foreign individuals, investors and even companies to invest in Bitcoin. Talking about PayPal…
Just recently, Richest man in the world Elon Musk, even though, he has put Bitcoin payments on hold with Tesla due to environmental concerns - He has confirmed that he is not selling his own bitcoins yet.
We then have other companies like MicroStrategy, US business intelligence company, to take bitcoin seriously as a store of value and as an alternative to their cash reserves.
The demand and positive outlook for bitcoin caused the crypto-currency to rally over $55,000. This might sound like a random number, but it is extremely significant because…
Reason #3: Bitcoin hit a net worth of over $1 trillion
Yep…
Having a total of over 18.6 million bitcoins in circulation and with each coin hitting the important price at $55,000 each (at the time)…
This made Bitcoin the first trillion dollar valued crypto-currency of all time…
This crucial event, has proven that the crypto-currency needs to be taken seriously which is attracting more investors, companies, banks, governments and institutions to adopt and own the coin.
And even though the price has dipped below $50,000, due to the short term concerns of what happened with Tesla, as I’m writing this.
I expect this to be very short lived, until the panic subsides.
Right now, you need to see this chart and why I’m so bullish on Bitcoin this year.
Reason #4: This Rising Channel is sending Bitcoin to the moon!

In the daily chart of Bitcoin, you can see it’s been moving in a strong rising trend channel since last year (Shaded area).
In this channel it bounces on higher lows, and then moves to all-time high prices.
And now that the price has bounced off its most recent higher low, once again at the bottom of the channel – we can expect Bitcoin to rally to its next price target.
Which in this case, my first prediction price for Bitcoin in 2021 is $73,000.
________________________________________
Announcing FSP Invest’s
OPEN HOUSE
For 30 Days, Sample our Top Three Investment Newsletters to see if they are right for you...
Find out more here.
________________________________________
Here’s how I’ll profit from the 28.97% Bitcoin run up
First, I’ll buy and profit by owning Bitcoin CFDs with a reputable broker that offers crypto currencies.
And ride it up until it hits my first price target for the year.
Second, you can read millionaire and Crypto-currency expert Sam Volkering's book on how to profit from the crypto revolution if you want to know how to get started!
Trade well,
Timon Rossolimos,
Analyst, Red Hot Storm Trader
Tags: timon rossolimos, trading, bitcoin, crypto, cryptocurrencies